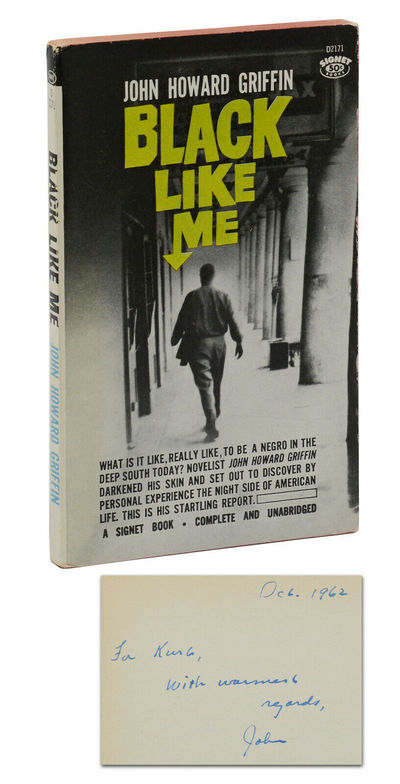 by Griffin, John Howard; [Kurt Enoch]
New York: Signet Books, 1962. First Paperback Edition. Near Fine. First paperback edition. Signed by John Howard Griffin to his publisher: "For Kurt, With warmest regards, John, Oct. 1962." [ii], 157, [3] pp. Illustrated wraps. Near fine bright copy with just a hint of handling. From the library of Dr. Kurt Enoch (1895-1982), a noted German publisher who co-founding pioneering paperback publishing house Albatross. Forced to flee the Nazis he landed in New York in 1940 and in 1948 co-founded and became President of New American Library (parent company of Signet Books), which became one of the successful and acclaimed post-war publishing houses. He went on to become one of the most highly regarded figures in American publishing. The basis of the 1964 film directed by Carl Lerner, starring James Whitmore, Sorrell Booke, Roscoe Lee Browne, Al Freeman, and Will Geer. From the front cover: "What is it like, really like, to be a negro in the deep south today? Novelist John Howard Griffin darkened his skin and set out to discover by personal experience the night side of American life. This is his startling report." A nice association between the crusading author and his publisher, who together popularized anti-racism in the form of this book. (Inventory #: 140940011)
$1,200.00 add to cart Available from
Burnside Rare Books
Share this item
Burnside Rare Books
Offered by

The Vestal Lady on Brattle