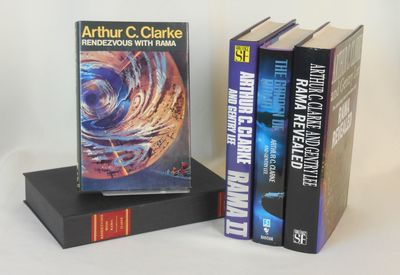 by Clarke, Arthur C.; Lee, Gentry (co-author, sequel volumes)
London: Victor Gollancz Ltd, 1973. First Edition. Hardcover. Fine/fine. First printing, octavo size, 256 pp., signed by Arthur C. Clarke, in a custom box (see below for details on the three sequel volumes). Sir Arthur Charles Clarke (1917-2008) was an incredibly talented man; by the time of his death he had earned a number of Hugo and Nebula awards for his science fiction, he received the Kalinga Prize in 1961 for popularising science, served twice as the chairman of the British Interplanetary Society, was appointed a Commander of the Order of the British Empire in 1989 and was knighted in 1998. Perhaps best known to most Americans as the author of "2001 A Space Odyssey", the "Rama" series is "regarded as one of the cornerstones in Clarke's bibliography", having been awarded both the Hugo and Nebula awards upon publication. The story is set in the 2130s, when a group of humans intercept an alien ship: "...it was only when it was realised that it had a diameter of some twelve miles and that its course might completely upset the delicate balance of the solar system that scientists became at first intrigued and then worried..." (from dust jacket flap). Immensely popular, the "New York Times" reviewer wrote that the book had "that chilling touch of the alien, the not-quite-knowable, that distinguishes sci-fi at its most technically imaginative". The next three novels in the series (included here) were co-written by Gentry Lee; eventually Lee would go on to write himself the final two volumes in the series (not included here). ___DESCRIPTION: "Rendezvous with Rama": bound in full green paper (textured to look like cloth), gilt lettering on the spine, gold endpapers, signed in blue ink by Arthur C. Clarke on the title page with the date of "2 Aug 86", first printing per Currey (no statement of printing on copyright page); octavo size (8" by 5 1/8"), pagination: [1-5] 6-256. The dust jacket is not price-clipped, showing the original price of 2 British Pounds Sterling on the lower right of the front flap, jacket design by Bruce Pennington with a pictorial depiction of the interior of the spaceship on the front with yellow and white lettering, white lettering on the spine, back panel a solid black, front flap a summary of the book, back flap blank other than the ISBN number at the bottom; the book is encased in a custom solander box covered with black cloth, the inner trays lined with white paper, two red leather spine labels with gilt lettering and rules. "Rama II" published by Victor Gollancz in 1989, this the first printing: bound in full black textured paper, gilt lettering on the spine, octavo size (9.5" by 6.25"), pagination: [1-7] 8-379; dust jacket with the original price of 12.95 British Pounds, circular graphic presumably of a spaceship in yellow on the front, white and silver lettering, same on the spine, back panel blank (other than ISBN), front flap with a short summary and back flap with a short author bio. "Garden of Rama" published by Bantam Books in 1991, this the first U.S. printing (with the full number line): bound in blue paper over boards with a purple linen shelfback, silver lettering on the spine, octavo size (9.25" by 6.25"), pagination: [i-vi], [1-3] 4-441; pictorial dust jacket shows the original price of $20.00 on the front flap, with a wrap-around illustration by Paul Swendsen showing multiple ships in space, raised lettering in metallic blue on the front panel, blue and white lettering on the spine, review blurbs on the back panel, summary of the book on the front and back flaps, short author bios on the back flap. "Rama Revealed" published by Victor Gollancz in 1993, this the first printing, bound in full black textured paper, gilt lettering on the spine, octavo size (9 3/8" by 6 3/8"), pagination: [1-7] 8-479; pictorial dust jacket shows the original price of 15.99 British Pounds on the front flap illustration on the front panel by Bob Corley with white and silver lettering, white lettering on the spine, summary on the front flap and author bios on the back flap, review blurbs on the back panel. ___CONDITION: "Rendezvous with Rama" fine overall, with clean boards, perfectly straight corners without rubbing, a strong, square text block with solid hinges, the interior is clean and bright, and entirely free of prior owner markings; some light foxing to the top edge of the text block, text block very slightly cocked, and a small chip from the rear pastedown at the top fore-edge corner (presumably as it came from the binder, as there is absolutely no evidence of wear); the unclipped dust jacket fine overall, clean, not sunned, perhaps a minute amount of wear at the head of the spine and a hint of toning at the edges; the solander box fine, clean, strong and study, without wear. "Rama II", "Garden of Rama" and "Rama Revealed" all fine in fine, unclipped dust jackets; "Garden of Rama" showing some lift to the thin plastic coating the publishers applied to the paper (due to the raised lettering, an unfortunate choice). ___CITATION: Currey p. 115. ___POSTAGE: International customers, please note that additional postage may apply as the standard does not always cover costs; please inquire for details. ___Swan's Fine Books is pleased to be a member of the ABAA, ILAB, and IOBA and we stand behind every book we sell. Please contact us with any questions you may have, we are here to help. (Inventory #: 20050514)
$1,100.00 add to cart or Buy Direct from
Swan's Fine Books
Share this item

Mastering the Art of French Cooking, Volumes One and Two

New York : Alfred A. Knopf , 1971
(click for more details about Mastering the Art of French Cooking, Volumes One and Two)
View all from this seller>