The Liqueur Compounder's Handbook of Recipes For the Manufacture of Alcoholic Cordials and Compounded Spirits. 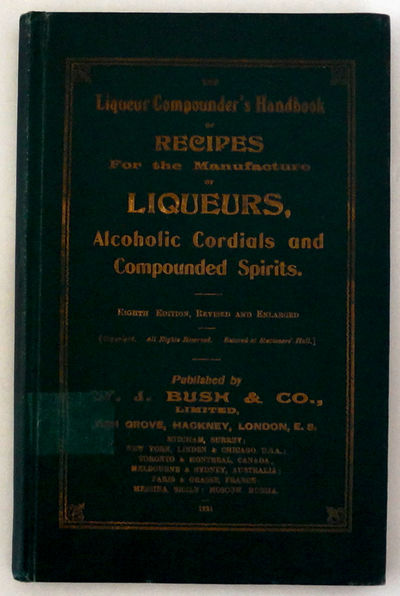 by Bush, W.J. & Co
Hardcover. 8vo. Green cloth over boards with gilt titling and border. All edges gilt. 57pp with a blank leaf headed "Memoranda" between every leaf of recipes, plus 15pp of product advertisement. Eighth Edition, Revised and Enlarged. Ink stamp of previous owner, F.L. Bassett of Baghdad, dated 1926, appears on the first three pages. Cover shows moderate wear with evidence of a small piece of tape having been removed from front cover.

A prohibition era guide to the methods and techniques of compounding on a commercial scale. Over 100 specific liqueur recipes with weights and measures in three different systems, English Imperial, Metric and the Liquid Wine Measure of the United States. (Inventory #: *247)
$550.00 add to cart Available from Abacus
Share this item
Abacus Books
Offered by

Specializing in Antiquarian, Collectible and Academic Books in all fields. Ephemera, Photography, and Archives.

The Political History of Slavery in the United States.

New York : The Neale Publishing Company , 1915
(click for more details about The Political History of Slavery in the United States.)
View all from this seller>