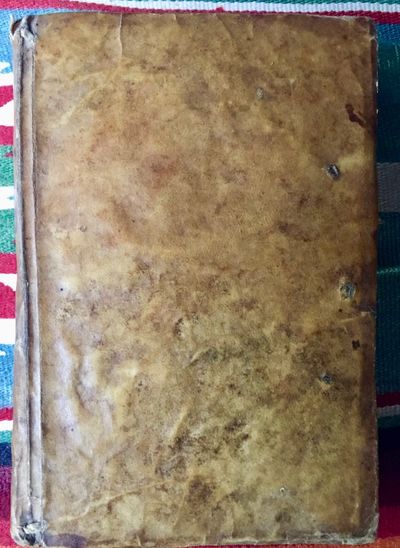 by Godinez, Miguel (Michael Wadding)
Sevilla: Juan Vejarano, 1682. Second edition. Small octavo, 10.5 x 15cm, ff 13, pp 385 + 6. There is an earlier edition apparently, printed in Puebla, Mexico, the year previous, which is exceedingly rare. Beristain (Bibliotheca) mentions it in his biographical sketch of Fr. Godinez, but Palau (Manual) says the work is so rare that he doubts Beristain actually saw it, and Medina (Imprenta de Puebla) apparently did not see a copy either because he does not give any collation. Godinez is the hispanisized name of Wadding, a notable Irish family: Miguel's brother Luke, a franciscan, was a significant figure in his day. Miguel (1591 - 1644) was trained abroad, as was necessary for Catholics then, at the Jesuit seminary attached to the Univ. of Salamanca, where he adopted the name Godinez and joined the Jesuits. He was sent to Mexico soon after 1609, as a misionary in Sinaloa. Later he taught philosophy in Puebla and theology in Mexico at the Jesuit university San Pedro y San Pablo. He was a noted spiritual director. Beristain says: "su inocencia de costumbres fue admirable." Works of mystical theology are quite rare in Mexican ecclesiastical history - in fact, this work may be unique as the only original mystical treatise composed in Mexico . OCLC shows less than a dozen copies in library holdings: there were two later printings, in Spain, in the 18th century, all rare. This is a nice copy, paper is fresh, binding is contemporary vellum; "Godinez" is inked in gothic letters on the spine. (Inventory #: 7527)
$1,350.00 add to cart Available from Plaza Books
Share this item