A FORMER OFFICER IN THE "ARMY OF CALIFORNIA" BECOMES AN EARLY EMPLOYEE OF THE UNION PACIFIC RAILWAY COMPANY EASTERN BRANCH (KANSAS PACIFIC RAILWAY) AFTER BEING PROMISED A JOB AS THE CONDUCTOR OF ITS SECOND TRAIN.; Letter from Grove Watson to a friend reporting that had recently accepted a position with the railroad in Kansas 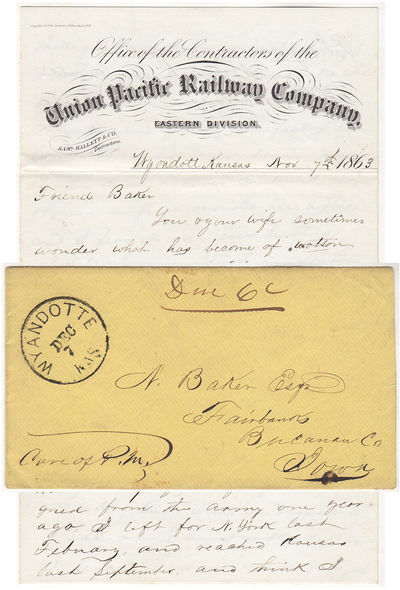 by Grove Watson
This letter on the stationery of the Union Pacific Railway Company, Eastern Division is datelined, Wyandotte, Kansas, November 7, 1863, and enclosed in a mailing envelope which bears a circular Wyandotte, Kas Dec 7 postmark and a manuscript "Due 6c" rate mark. In nice shape. A transcript will be provided.

Watson reports that since he
"wrote the last letter while in the Army of California. I resigned [and] am now engaged in the office of the R.R. Co. heading this letter. We have some 1,000 hands to work to work and pay them $1.50 per day, cash, every 30 days. Very good wages for the western country. . .. I now get $75 dollars per month and boarded. . .. I am promised the 2nd train as conductor, if I will remain on the road."
Although named similarly to the Union Pacific Railroad, the Union Pacific Railway Company, Eastern Branch was a separate firm. It began in 1855 as the Leavenworth, Pawnee, and Western Railroad, however in 1863, after a consortium of investors were joined by the Pennsylvania Railroad, the line received a charter from Congress to begin a parallel route across Kansas, south of the Central Pacific - Union Pacific tracks that would eventually run from Omaha to Sacramento. When funding ran short, the railroad-by then renamed the Kansas Pacific Railroad-decided to route its tracks north after reaching Kit Carson, Colorado, and join up with the Union Pacific near Denver.

Despite the Golden Spike Ceremony at Promontory Point the year before, this connection in 1870 marked the true completion of the transcontinental railroad, as passengers on the northern route were forced to leave their trains between Council Bluffs, Iowa, and Omaha, Nebraska, to cross the Missouri River by boat.

Track-laying, which was through the Plains tribes' hunting grounds, began in September 1863, not long before Watson penned this letter, and was protected by the 38th Infantry Regiment. During the construction, the railroad hired Buffalo Bill Cody to shoot buffalo to feed its large work crews. (For more information see "Union Pacific Railroad" at the Kansas Historical Society's kansapedia website.)

Watson had formerly been a lieutenant in the 2nd California Infantry Regiment, which was used to replace regular Union units at California and Oregon garrisons, so those soldiers could return east and fight in the Civil War. Watson's detachment served at Fort Umpqua, Oregon, and was instrumental in suppressing attacks on settlers by the Wailaki during the Bald Hills War. A very nice testament to early Kansas railroading which opened up homesteading and the settlement of the Central Great Plains. (Inventory #: 009615)
$750.00 add to cart or Buy Direct from
Read'Em Again Books and Paper
Share this item