AN ENGLISH BUSINESSMAN IN SAN FRANCISCO INFORMS HIS BROTHER IN GREAT BRITAIN ABOUT THE PENDING COMPLETION OF THE TRANSCONTINENTAL RAILROAD AND ITS IMPLICATIONS FOR CROSS-COUNTRY TRAVEL AND SHIPPING.; A stamped folded letter from San Francisco to Liverpool, England franked with a black 12-cent E grill stamp and accompanied by a Philatelic Foundation Certificate 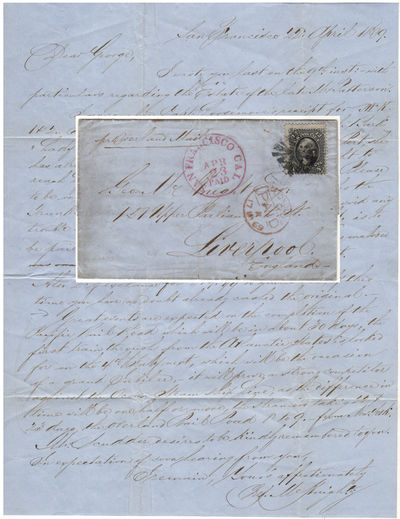 by Red. McKnight to George McKnight
This one-page folded letter is franked with a 12-cent black Washington stamp embossed with an E-grill for postal security (Scott # 90). The stamp is canceled by a fancy radial cork handstamp. It bears a magenta San Francisco paid exchange circular date stamp and a manuscript "pr Overland Mail" endorsement. It was carried by the S.S. Donau, a ship belonging to Norddeutscher Lloyd (North German Lloyd Line), see Hubbard and Winter's North Atlantic Mail Sailings 1840-75, p. 246), leaving New York on May 6th and arriving in Southampton on May 17th as testified to by a red London Paid transit circular date stamp with a backstamp showing it arrived in Liverpool later that day. In nice shape. Transcript and Philatelic Foundation Certificate of Authenticity will be provided.

In this letter, McKnight reports that the American Transcontinental Railroad is nearing completion and that will be the beginning of the end for ocean shipping from New York to California:
"Great events expected on the completion of the Pacific Rail Road which will be in about 30 days, the first train through from the Atlantic States is looked for on the 4th of July next, which will be the occasion of a grand Jubilee - it will prove a strong competitor against the Ocean Steam Ship Line as the difference in time will be on half or more, the steamers taking 22 & 23 days the overland Rail Road 8 to 9 from New York. . .."

McKnight over-estimated the time needed to complete the railroad. It was finished only 17 days later on May 10th when the ceremonial "Golden Spike" was driven at Promontory Point, Utah, joining the tracks of the Central and Union Pacific Railroads.

A certified example of a scarce stamp used properly to send a letter overland from San Francisco to New York and on to England made all the more valuable for its reference to the completion of the Transcontinental Railroad and prescient prediction that railroad transportation would soon eclipse the much slower travel and shipping by sea. (Inventory #: 009619)
$750.00 add to cart or Buy Direct from
Read'Em Again Books and Paper
Share this item