[A UNIVERSITY OF ALABAMA STUDENT JOINS THE NEWLY FORMED CORPS OF CADETS AS THE SCHOOL TRANSITIONS FROM ITS ROWDY PIONEER PAST INTO THE "WEST POINT OF THE SOUTH" AT THE BEGINNING OF THE CIVIL WAR]; A letter from Cadet Thomas B. Hall to Cousin Marie shortly after he arrived on campus to begin academic year 1861-1862 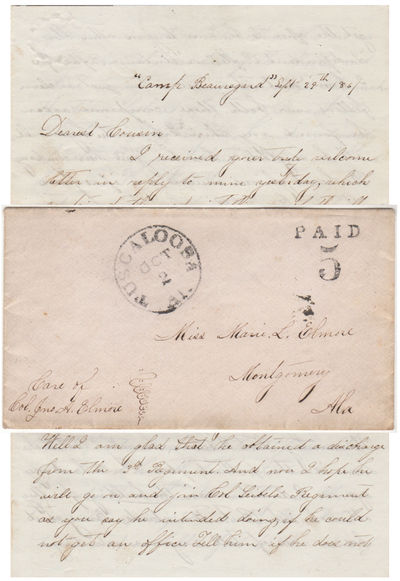 This letter is datelined "'Camp Beauregard' Sept. 29th 1861". It is enclosed in a stampless envelope addressed to Miss Marie. L. Elmore at Montgomery in "Care of Col. Jno a. Elmore". It bears a circular "Tuscaloosa / Oct 2 / Al." postmark and "Paid 5" rate mark, both in black. In nice shape. Old stamp dealer's pencil docketing on the reverse. Transcript provided.

In this letter, Hall, who arrived at the University about two weeks before, provides his "Cousin Marie" with a report on the arrival of students at the University of Alabama for the fall term of 1861-1862 and the recent requirement for all student become members of the Corps of Cadets.
"I believe honestly that Tuscaloosa is the prettiest place I ever laid my eyes on. . .. Every street has a row of tall evergreens extending from one end to the other. They are exactly in the middle of the streets and about twenty or thirty feet apart. They make the town look so cool and pleasant. The streets are also very level and not sandy at all. . .. The Cadets are almost crazy to be ordered down on the coast this winter [for] it is generally thought that Mobile will be attacked this winter. If so, our chances are splendid, and I cannot help almost wishing (excuse me) that it would be attacked. Then wouldn't the Cadets make their mark. We are learning to drill very fast. I tell you . . . we undergo as much hardship as soldiers. . .. We are State Troops and . . . are enlisted for twelve months and every fellow before he is a Cadet, is compelled to sign a pledge to remain here on year. If he does not, then he does not remain here as a Cadet. . .."
Hall also provides information about
"Hops . . . . Oh! I had glorious times the other night with the young ladies," and his roommates, "I am very glad to get in with them for they are said to be about the most quiet and studious boys in College.".
The University of Alabama was founded in 1831 to provide a classical education an prepare young men for service to church, state, and society. However, Alabama was a rough, frontier state and the sons of it pioneers ignored, did as they please, and ignored the schools rules and regulations with impunity. Drinking, gambling, and rowdiness took precedence over studies. After a fatal gunfight on campus, the then president, Landon C. Garland, had had enough, and he began a campaign to institute an academic military structure similar to West Point and the Virginia Military Institute.

Eventually, Garland's effort paid off, and a Corps of Cadets was established in August of 1860, and the change on campus was almost instantaneous. After the cadets were reviewed by the governor in January of 1861, the corps became the darlings of not just Montgomery but the entire state. Shortly after, the Civil War began, and students found themselves performing military duties along with their studies including serving as wagon guards and teaching volunteer companies the basics of drill and military life.

Notably, the Corps repulsed Union raiders in 1864 and served in the defense of Mobile the winter of 1864-1865. On April 3rd 1865, the Union's 6th Kentucky Cavalry approached Tuscaloosa, and, after assembling at the Rotunda, 300 cadets marched to meet them at the intersection of University Boulevard and Greensboro Avenue. After a heavy exchange of gunfire when it became clear the Cadets were outnumbered and outmatched in firepower, they withdrew and marched south from Tuscaloosa. The Union troops then burned the University.

During the Civil War, the university became known as the "West Point of the South," providing the Confederacy with seven generals, 25 colonels, 14 lieutenant colonels, 21 majors, 125 captains, 273 other commissioned officers and 294 private soldiers. In June of 2020, memorials to the Corps of Cadets were removed from their place of honor in front of Gorgas Library. For more information about the University of Alabama's Corps of Cadets, see University of Alabama Army ROTC History: "Alabama Cadets Call to Battle. . .." and Center's "The Burning of the University of Alabama" at the Tuscaloosa Sons of Confederate Veterans, both online.

The University of Alabama holds another letter from Hall to his cousin, written 12 days before. (Inventory #: 009622)
$850.00 add to cart or Buy Direct from
Read'Em Again Books and Paper
Share this item