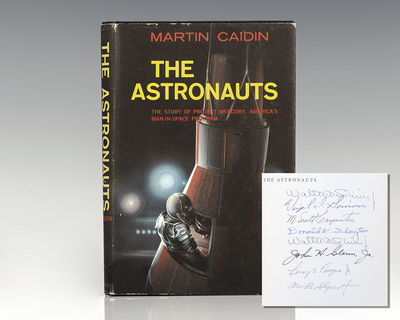 by Caidin, Martin; M. Scott Carpenter, Gordon Cooper, John Glenn, Gus Grissom, Walter M Schirra, Alan Shepard and Donald Slayton
New York: E. P. Dutton & Company, 1960. First edition of this introduction to Project Mercury. Octavo, original cloth, illustrated with drawings by Fred L. Wolf and photographs. Signed by all seven of NASA's original Project Mercury astronauts on the half-title page, using their full signatures. Signed by Walter M Schirra Jr. (signed twice), Virgil I. Grissom, M. Scott Carpenter, Donald K. Slayton, John H. Glenn, Jr., and Leroy G. Cooper Jr. and Alan B Shepard Jr. Near fine in a near fine dust jacket. Books with all of the Project Mercury's signatures are rare, especially with full signatures. "The first seven American astronauts were an admirable group of individuals chosen to sit at the apex of a pyramid of human effort... They chose to lead by following the opportunity that chance, circumstance, technology and history had prepared for them" (Swenson, Grimwood & Alexander). NASA introduced the seven astronauts in Washington on April 9, 1959. Although the agency viewed Project Mercury's purpose as an experiment to determine whether humans could survive space travel, the seven men immediately became national heroes and were compared by TIME magazine to "Columbus, Magellan, Daniel Boone, and the Wright brothers" (TIME 1959). (Inventory #: 116879)
$12,500.00 add to cart or Buy Direct from
Raptis Rare Books
Share this item

San Francisco : Harper Collins , 1993
(click for more details about The Alchemist: A Fable About Following Your Dream.)

The Handmaid’s Tale and The Testaments.

Toronto : McClelland and Stewart , 1985-2019
(click for more details about The Handmaid’s Tale and The Testaments.)
View all from this seller>