NO FUTURE WITHOUT FORGIVENESS 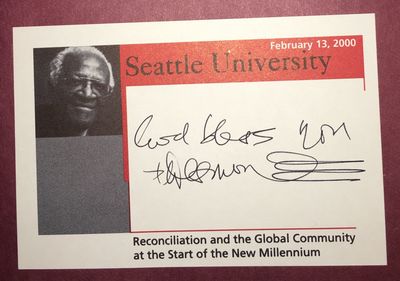 by Tutu, Desmond
New York: Doubleday, 1999. First edition. hardcover. A fine copy in a fine dust jacket. On February 13, 2000, Desmond Tutu was in Seattle at Seattle University receiving an Honorary Doctorate of Humanities, at which time he signed this copy on a dated Seattle University bookplate: "God Bless You / Desmond Tutu." The establishment of South Africa's Truth and Reconciliation Commission was a pioneering international event. Never had any country sought to move forward from despotism to democracy both by exposing the atrocities committed in the past and achieving reconciliation with its former oppressors. At the center of this unprecedented attempt at healing a nation has been Archbishop Desmond Tutu, whom President Nelson Mandela named as Chairman of the Truth and Reconciliation Commission. Here, with the final report of the Commission just published, Archbishop Tutu offers his reflections on the profound wisdom he has gained by helping usher South Africa through this painful experience. (Inventory #: 14489)
$350.00 add to cart or Buy Direct from Ed Smith Books
Share this item