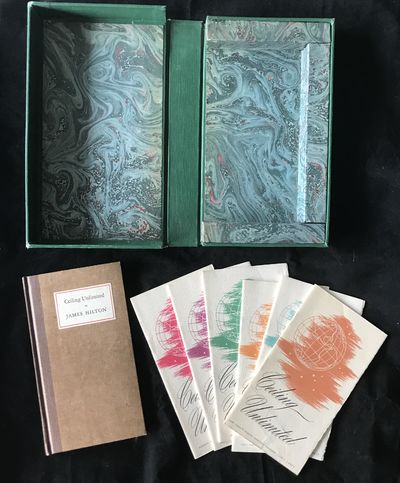 by Hilton, James
Burbank, CA: Columbia Broadcasting Service, 1943. Hilton, James. CEILING UNLIMITED. Burbank, California: Columbia Broadcasting System, 1943. First Edition, 16mo, #72 of a limited edition of 100 copies SIGNED BY THE AUTHOR, a series of six pamphlets especially bound together in book form. Paper covered boards with brown spine, gilt, issued without dust jacket. [With:] all six individual original pamphlets, 16pp each, in different colored wrappers, dated from June 28, 1943, to August 2, 1943, loosely laid into a custom protective clamshell case with the hardback volume. CEILING UNLIMITED was a CBS radio program, written, produced and narrated by Orson Welles from 1942-1944, and sponsored by Lockheed and Vega Aircraft Corporation. To paraphrase Welles's biographer, the program's purpose was one of simple propaganda, to boost morale within the aircraft industry in order to glorify the vast increase in productivity the war required. James Hilton, author of Goodbye Mr. Chips and Lost Horizon, and screenwriter of Mrs. Miniver (the film which greatly helped convince Americans to come to Britain's aid during WW2) was one of several contributors to the success of this paean to American air power. This book, and the complete set of pamphlets, represent a remarkable and exceedingly rare survival.. Signed by Author. First Edition. Hard Cover. Near Fine. 16mo - over 5¾" - 6¾" tall. (Inventory #: 003081)
$750.00 add to cart Available from
Lakin & Marley Rare Books
Share this item
Lakin & Marley Rare Books
Offered by

Boston : Little, Brown , 1935
(click for more details about GOODBYE MR. CHIPS (Inscribed Copy of the 1935 Holiday Edition)))
View all from this seller>