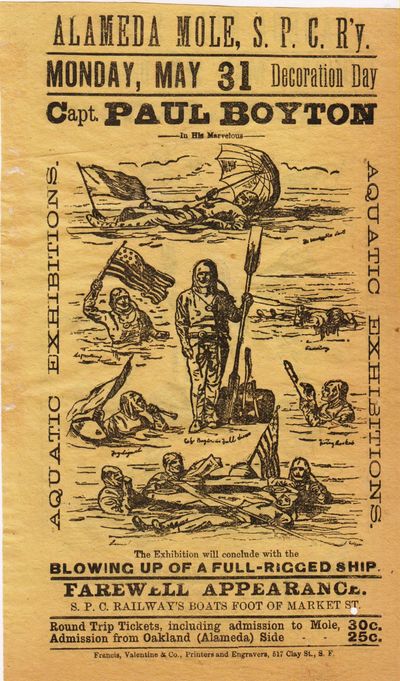 by Ephemera.
4 1/2 x 7 1/2 inch handbill, printed identically on both sides, depicting Boyton and his suit in various poses. [41767]
Boyton, born in Ireland, was a Navy diver and Life Saving Service veteran who became known as "The Fearless Frogman." He might also be legitimately regarded as one of the earliest proponents of what we now know as the survival suit. Boyton's suit (actually invented by one C.S. Merriam of Iowa) was made of vulcanized rubber. Air chambers provided flotation. He was a tireless self-promoter, writing at least one book and appearing in waterfront cities throughout the US and Europe. In the 1870s he made quite a splash demonstrating his rubber "swimming apparatus." He would have himself dumped far from shore and then paddle for hours to arrive safely. Once he even crossed the English Channel. I've had other ephemeral items tracing his career, including one which included as a finale the "Explosion of a Miniature Vessel." The present item places him all the way west, in San Francisco Bay, still blowing up that ship, but by now failing to mention that it was a miniature. No copies on Worldcat. Very good condition. (Inventory #: 42246)
$650.00 add to cart Available from
Ten Pound Island Book Co.
Share this item

Toulouse-Lautrec: His Complete Lithographs and Drypoints.

The Prints of Theodore Roussel: A Catalogue Raisonne.

Bronxville, NY : M.H. Publishers , 1991
(click for more details about The Prints of Theodore Roussel: A Catalogue Raisonne.)
View all from this seller>