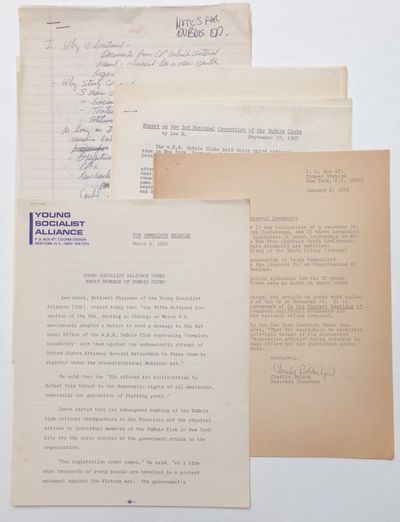 by [Young Socialist Alliance]
New York: YSA, 1966. Five items, most 8.5x11 inches, some toning and handling wear, couple minor stains. The YSA, affiliated with the Trotskyist Socialist Workers Party, saw the CPUSA-affiliated DuBois Clubs as competing for the left space within the youth movement. That did not prevent them from issuing a three page March 9, 1966 press release, included here, expressing solidarity in the face of the US Attorney General's attempt to register the group under the McCarran Act. The other documents, however, include a ten-page packet of three internal Communist Party documents about youth policy from 1969, which the YSA obtained and copied for distribution to better understant the competition; a three-page report by Les E. describing the 1967 national convention, which describes the group as demoralized and outlines the main items on the convention agenda; a 9-page packet reprinting an article from Political Affairs , presenting the parts relevant to youth organizing, and four handwritten pages of notes from a YSA perspective discussing the Clubs. Also thrown in are two photocopies articles from the CP press about youth work. (Inventory #: 253078)
$75.00 add to cart or Buy Direct from Bolerium Books
Share this item