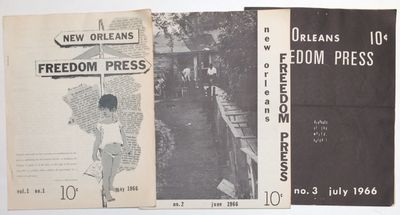 New Orleans: the newsletter, 1966. First three issues of the short-lived newsletter (publication ceased with January 1967 issue). All are 8.5x11 inches, faint horizontal fold crease and staple holes from mailing, postal marks on rear cover, general handling wear; the last issue also has uneven toning to the rear cover. Ten pages each. Also included is a heavily worn and stained leaflet from the New Orleans Committee to End the War in Vietnam, which was associated with the newsletter. Material on local organizing against the Vietnam War, Jack Frazier item about the war's toll on African Americans, efforts to rebuild the Ninth Ward after hurricane damage, a piece by Murray Levy about the Free Southern Theater, and much more. (Inventory #: 253055)
$175.00 add to cart or Buy Direct from Bolerium Books
Share this item