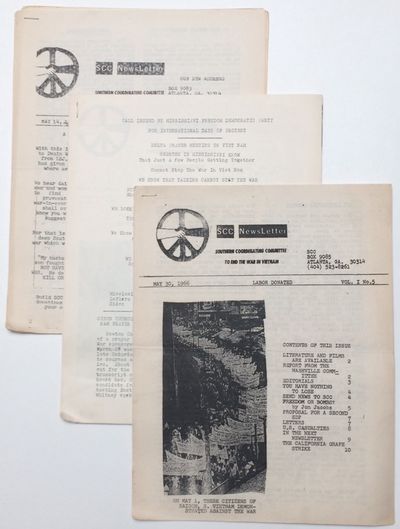 by Southern Coordinating Committee to End the War in Vietnam
Atlanta: SCC, 1966. Three issues of the 8.5x11 inch, mimeographed newsletter; some handling wear and uneven toning, postal markings on rear covers of the latter two. OCLC lists only three incomplete holdings as of June 2020. The SCC brought together elements of the Civil Rights movement and the anti-war movement to organize non-violent resistance to the Vietnam War among southern communities that had largely been left behind by northern anti-war activism. The third issue has a cover sheet bearing an appeal from the Mississippi Freedom Democratic Party calling for international days of protest, noting the refusal of the Georgia legislature to seat Julian Bond because of his opposition to the war. The cover of that issue has a blurrily reproduced photo of Martin Luther King Jr's executive assistant John Barber holding an anti-war sign as police drag him away. Among the reports on local meetings and other activities are several notices of churches or other meeting facilities being burned down. Solidarity with parallel movements is revealed in such articles as a call to boycott California grapes. Activists involved included John Lewis, Ann and Carl Braden, and Isobel Cerney. (Inventory #: 253117)
$295.00 add to cart or Buy Direct from Bolerium Books
Share this item