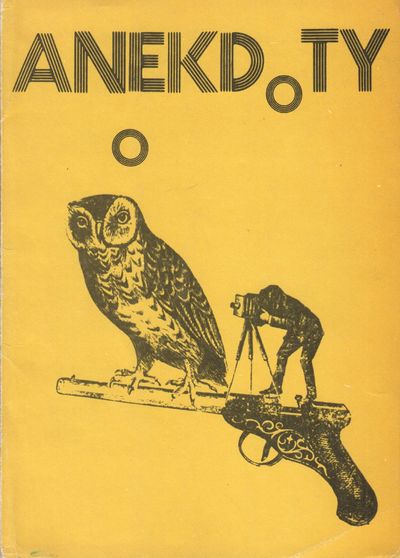 by Hoffmeister, Adolf and Josef Kroutvor
Prague: Uměleckoprůmyslové muzeum, 1985. Octavo (20.7 × 15 cm). Original yellow printed folder containing [6] + 38 leaves of Hoffmeister's humorous collages to rectos. Very good. Complete series of reproductions of humorous collages, or jokes in collage form, by Adolf Hoffmeister (1902-1973), an artist influenced by the Poetist style formulated by the Devětsil group of Czech avant-garde artists, which included Vitězslav Nezval, Jaroslav Seifert, and Karel Teige. By contrast to his early cubist collages, the present works stem from his post-war return to the medium, in 1959, when collage gradually began to replace drawing and other media in his oeuvre. The present cycle was created largely in 1965 and reconstructed based on the artist's estate. They are a simplified, laconic, but humorous and still erotic version of a genre that fascinated Hoffmeister since the late 1920s. With a three-page introduction by Josef Kroutvor. Scarce complete. As of June 2020, KVK and OCLC only show two copies in North America, at the Cleveland Museum of Art and Yale. (Inventory #: P6870)
$250.00 add to cart or Buy Direct from
Bernett Penka Rare Books
Share this item