PICTORIAL EDITION OF THE Tilton – Beecher TRIAL. A COMPLETE HISTORY, Containing over One Hundred Engravings of this Famous Trial. 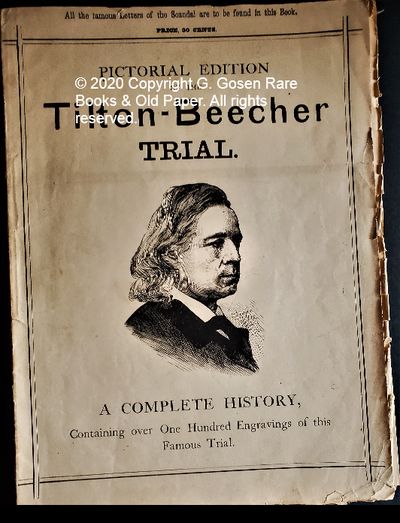 by [Frank Leslie]
PICTORIAL EDITION OF THE Tilton – Beecher TRIAL. A COMPLETE HISTORY, Containing over One Hundred Engravings of this Famous Trial. PRICE, 30 CENTS. No date, no publisher. [1875] 29.3 cm x 21.5 cm. Back cover is a full-page advertisement for The Days' Doings! Listing the Days' Doings Co., at 535 Pearl St., N.Y. Four signatures of 16 pages each of machined paper, 64 pages, 72 in-text engravings not the "over one hundred" proclaimed on the cover and first page of text, 73 engravings counting the portrait of Henry Ward Beecher on the front cover. There are 8 full-page engravings, 2 nearly full-page and 62 other text illustrations of varying sizes. The publisher of this large case history in large-pamphlet form was probably Frank Leslie, as he had changed the name of his newspaper, The Last Sensation, to
The Days' Doings in 1867. Two copies of this pamphlet in addition to the copy offered here make three recorded copies of this contemporaneous imprint. This copy is untrimmed and in near-fine condition.
Tilton versus Beecher was the most sensational trial in nineteenth-century America. Tilton brought a legal action his wife's lover, Rev. Henry Ward Beecher, for alienation of affection. The trial was lurid front-page news in every major newspaper in America for months, and the trial ended with a hung jury.
On May 22, 1871, a letter to the editor of the New York World written by Victoria Woodhull was published, in which she said, among other things, adapting Matthew 23:27 to her purpose, "My judges preach against free love openly and practice it secretly; their outward seeming is fair [but] inwardly they are full of 'dead men's bones and all manner of uncleanness.' For example, I know of one man, a public teacher of eminence, who lives in concubinage with the wife of another public teacher of almost equal eminence." The "public teacher of eminence" was Rev. Henry Ward Beecher, and the wife was Mrs. Theodore Tilton.
For the better part of three years, many measures were taken to protect the reputation of Harriet Beecher Stowe's brother from exposure and ruin. As in politics, the cover-up of Mrs. Tilton's adulterous relationship with Beecher was ultimately unsuccessful and Victoria Woodhull had her satisfaction. (Inventory #: 392)
$4,000.00 add to cart Available from
Gosen Rare Books
Share this item