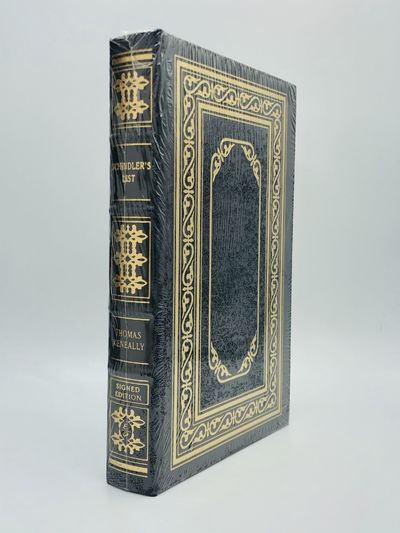 by Keneally, Thomas
Norwalk, Connecticut: The Easton Press, 1999. Hardcover. Fine. Collector's Edition, signed by Thomas Keneally. Accompanied by a Certificate of Authenticity and printed note from The Easton Press. Celebrated literary recreation of the true story of Oskar Schindler, a German-Catholic industrialist who used his own enormous wealth to run a prison-factory in Cracow, Poland during World War II in order to employ and protect thousands of Jews from Nazi persecution. Winner of the 1982 Booker Prize for fiction, the novel later served as the basis for the acclaimed 1993 motion picture directed by Steven Spielberg and starring Liam Neeson, Ralph Fiennes, and Ben Kingsley. Octavo. Full black leather binding, with elaborate gilt stamping, four raised bands, moire silk endpapers, and a ribbon marker. A fine copy - as new, still sealed in the original shrink wrap. (Inventory #: 70909)
$150.00 add to cart Available from Johnson
Share this item

New York : Alfred A. Knopf , 1953
(click for more details about NOTES WITHOUT MUSIC)

AN INTRODUCTION TO THE THEORY OF NUMBERS

Oxford : Oxford University Press , 1938
(click for more details about AN INTRODUCTION TO THE THEORY OF NUMBERS)
View all from this seller>