The Mechanism of Nuclear Fission [and] On Continual Gravitational Contraction [in] The Physical Review Vol. 56, No. 5, September 1, 1939 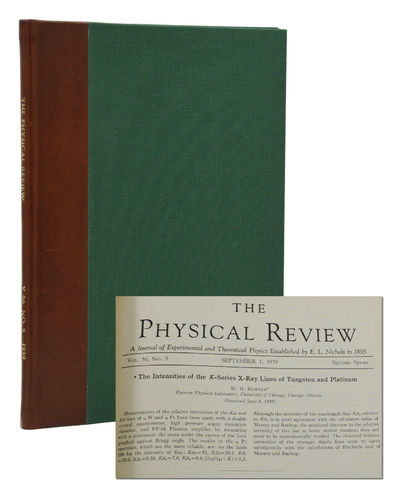 by Bohr, Niels and John A. Wheeler; Oppenheimer, J. Robert and H. Snyder, et al.
Lancaster, PA & New York: Published for the American Physical Society, 1939. First Edition. Fine. Pp. 387-486. Complete issue, bound without wraps in green cloth with leather spine lettered in gilt. First edition of two important papers, "The Mechanism of of Nuclear Fission" by Niels Bohr and John A. Wheeler (pp. 426-450), and "On Continual Gravitational Contraction" by J. Robert Oppenheimer and H. Snyder (pp. 455-459, with 3.5" tear to bottom edge of p. 455 affecting text). Contents toned, else Fine. Published on the literal eve of World War II, September 1, 1939, the same day Hitler invaded Poland from the west, and two days before Britain and France declared war on Germany, Bohr and Wheeler's paper is the first fully worked out theory on nuclear fission, laying the ground work for a hydrogen bomb. Though their theory would be further refined, it remains the standard description of the mechanism of nuclear fission. Oppenheimer and Snyder's paper launched modern theory of black holes, though the term was not yet coined. Here, they theorize that if a star's collapsing core had sufficient enough mass, that even the neutron pressure would be insufficient to prevent the collapse to a black hole. (Inventory #: 140940036)
$1,250.00 add to cart Available from
Burnside Rare Books
Share this item
Burnside Rare Books
Offered by