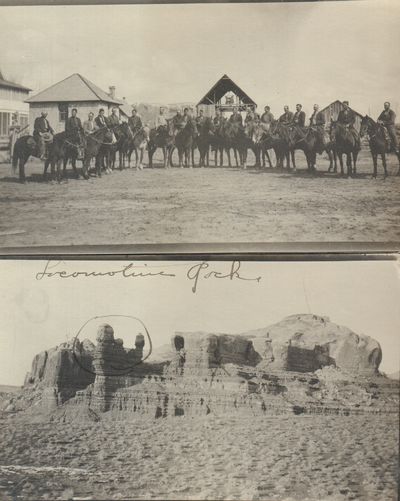 Very Good. Condition: Very Good. Seven real photo postcards depicting scenes from the Battle of Cottonwood Gulch, February 1915. RPPCs measure 3 ½" x 5 ½" and have contemporary annotations on verso. Light soiling, else very good.The Battle of Cottonwood Gulch of the Bluff War (or the Posey War) was one of the last armed conflicts between Native Americans and United States Government and was centered around Bluff, Utah. This came about after an incident between Mexican shepherd, Juan Chacon, and the son of Paiute Chief Polk, Tse-ne-gat. Chief Polk defended his son's actions after Tse-ne-gat had been accused of murdering Chacon and resisted arrest. Polk and his people were soon joined by Chief Posey, setting the stage for battle. A posse of sheriffs and cowboys from Montezuma County, Colorado went to make arrests and the Battle of Cottonwood Gulch ensued. The conflict ended about a month later when Polk and Posey surrendered to the U. S. Army. In the end, Tse-ne-gat was found not guilty. These images depict scenes from that time. Four of the images show scenes from conflict, although these were probably staged (Utah Historical Quarterly, Vol. 79, Issue 3). One image depicts a group of about 20 men on horseback, "the fighting men" as written on the back of the postcard; two images depicts scenes of the fight, one stating that "Joe Akin, lying down was shot through the head and killed instantly on this spot"; and the third depicts a "funeral procession" with a man being dragged on the ground with a rope tied around his ankles. The other three images depict scenery from the area of the conflict including "Locomotive Rock," "Mexican Hat," and "the Navajo Twins." Needless to say, the first 15 years of the 20th century was a tumultuous time in Southeastern Utah. These RPPCs depict a piece of that history. . (Inventory #: 021551)
$500.00 add to cart Available from
Back of Beyond Books
Share this item


(click for more details about Letters from an American in Japan [4 TLS on Japanese Rice Paper, 1920s])