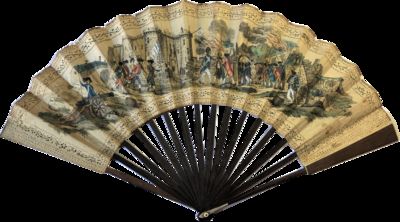 by FRENCH REVOLUTIONARY FAN
[France, 1789. Hand-colored engraved folding paper fan, printed on recto and verso on two adhered sheets, the recto with a full-width etched and engraved scene of the taking of the Bastille, colored in watercolors and white gouache, within stencil-printed decorative border, the verso with an engraved poem; mounted on original plain wooden sticks, the guards with narrow fillets of decorative bone along edges and at rivet, the unfolded leaf measuring approx. 137 x 500 mm., total fan measurement 208 x 500 (10 3/4 x 20 in.). Condition: a few small chips and old paper patches, mainly to the borders, one small patch within the engraved area, affecting only the background, slight wear along a few pleats, one or two small stains, 2 words slightly rubbed on verso, a guard relined.***A fine ephemeral survival: a rare fan on a popular and dramatic theme, no doubt issued soon after the event depicted. Although by July 14 1789, the Bastille was nearly empty, and its historical reality was that of "the least cruel of all the [French] state prisons" (Marion, Dictionnaire des Institutions francaises, p. 40), its potency as a visually imposing symbol of tyranny was undiminished. The day of its storming by a crowd of about 1000 "bourgeois" was unfortunately one of intense bloodshed, with over 100 people, including 98 attackers, several soldiers and the garrison commander the Marquis de Launay, losing their lives. De Launay's head and that of Jacques de Flesselles, "Prévôt des Marchands," were later paraded on pikes. This commemorative fan for ladies avoids all gore. The etched scene on the fan's front is a panoramic view showing several events occurring simultaneously, with six objects and figures number-keyed to an explanatory text printed on the verso. On either side are two militiamen with pikes and cannons, watching the action: at the left a group of citizens bearing an ax, pike, sword, and a striped banner (a precursor of the Tricolore?) approach the fortress, looming massively behind them, a white flag waving from its battlement, while citizens with pikes can be glimpsed on the main opened drawbridge and within the fortress; in the middle foreground the Governor de Launay is seized by the "grenadier and the compagnon clockmaker" (whose names are elsewhere variously given as Harné or Arné and Humbert or Hemert); on the right a crowd of citizens, with a boy drummer at the front, are about to confront the heavily guarded first drawbridge, leading to the courtyard, while smoke and flames pour out of other buildings, one identified as de Launay's house. On the verso is the text: the title, keyed explanations, and the lyrics to a song in 8 stanzas, with the heading "Chanson d'un premier Capitaine Commandant de District, en l'honneur des Bourgeois de la Ville de Paris, sur l'air de Calpigi," and incipit "Enfans, le Ciel benit vos armes / ils sont passez ces jours d'allarmes...".Fans at the time were often used as propaganda vehicles and adapted popular prints; those responding to current events were probably produced rapidly by specialized imagiers (print engravers and publishers) who probably disposed of sheets with the borders pre-stencilled, which they could quickly print off with new topical engravings. Contemporary prints of the taking of the Bastille were produced in the hundreds, if not thousands, and many examples survive. One of the more finished engravings titled "Prise de la Bastille," by Jacques-Louis Bance, had a title very close to that of the present fan; another, titled "Prise de la Bastille le 14 juillet 1789," was by Dupin (copies of both can be viewed on Gallica). Anonymous copies and adaptations included other prints, a broadside with a song, and several fan leaves (Cf. Hennin Collection 10341 in the BnF, and British Museum, Schreiber Collection of Fans, nos. 93-96). The Hennin and British Museum examples, and a fan on the same subject in the Fitzwilliam Museum (inventory no. 1877051), all differ from the present example in both the image and the printed song; most have a smaller image on the front of the fan, flanked by text.References: Collection Michel Hennin. Estampes relatives à l'Histoire de France, vol. 118, Pièces 10278-10385; British Museum, Catalogue of the Collection of Fans and Fan-leaves presented to the British Museum by the Lady Charlotte Schreiber (1893), nos. 93-96. (Inventory #: 4076)
$4,800.00 add to cart or Buy Direct from
Musinsky Rare Books
Share this item