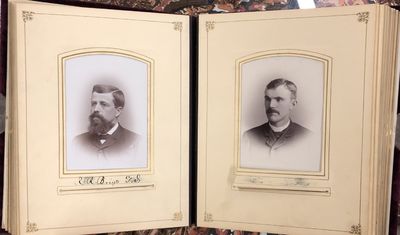 Very Good. Collection of 28 cabinet card portraits dating to the 1880s-90s, housed in an ornate velvet album and stand. All the portraits depict men, likely from the Deadwood/Lead, South Dakota area. Album measures 9" x 11", has deep purple velvet boards, decorative metal clasp and embellishments, gilt edges; leaves are heavy cardstock; album is affixed on a matching stand about 6" tall and was patented in 1882. A few of the portraits have manuscript notations identifying the person posing (written on the leaf, not the portrait); and only one photo has manuscript annotations on verso. Overall very good. Album covers have light wear; a few of pages have tears where portrait is inserted; one portrait has heavy yellowing, the rest are in fine condition. Six pages are missing photos. From the names written on the portraits and the photographers producing the portraits, it seems likely that the men depicted here were from Lead and Deadwood, South Dakota. Two men were identified in association with the International Order of Odd Fellows: C. H. Enos was a Grand Master of the I.O.O. F. at Lead City Lodge #17, and R. R. Briggs a Grand Master of the I. O. O. F. in Deadwood, SD. Photographers range from all over the United States but most were from Deadwood, Dakota Territory (or South Dakota). Eight portraits were taken by Albert Pollock (Deadwood, Dakota Territory), 6 by J. C. H. Grabill (Deadwood, South Dakota), 2 Meddaugh & Winchester (Lead, S.D.); the remaining names only took one portrait, Pollock & Duganne (Deadwood, Dakota), Geo. W. Scott (Deadwood, Dakota), Kersting (Deadwood, Dakota), M. G. McClaire (Seattle, Washington Territory), Bradley & Ruldson (San Francisco), T. M. Swem (St. Paul), Julius S. West (Chicago), Rud Bachmann (New York), and 4 are unknown. Many of these photographers were identified in Mautz. J. C. H. Grabill, who took 6 of the portraits, was a gifted early western photographer, documenting frontier life in the Dakota Territory, Wyoming and Colorado. He was also the official photographer of the Black Hills and Fort Pierre R.R. and Home Stake Mining Co., and photographed the aftermath of the 1890 massacre at Wounded Knee (p. Mautz 226). A great collection of portraits from Dakota photographers in a showy album and stand. . (Inventory #: 021567)
$900.00 add to cart Available from
Back of Beyond Books
Share this item

Cattle Trails of the Old West


(click for more details about Cattle Trails of the Old West)

Trail Drivers of Texas - Interesting Sketches of Early Cowboys and Their Experiences on the Range and on the Trail During the Days that Tried Men’s Souls...[Volume II Only]


(click for more details about Trail Drivers of Texas - Interesting Sketches of Early Cowboys and Their Experiences on the Range and on the Trail During the Days that Tried Men’s Souls...[Volume II Only])
View all from this seller>