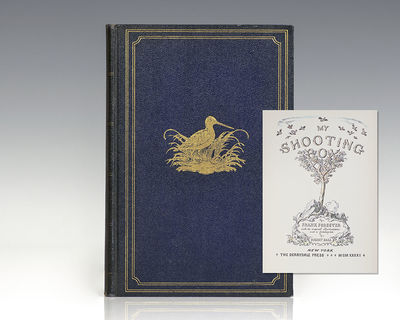 by Forester, Frank
New York: The Derrydale Press, 1941. First edition of the author's collection of hunting tales. Octavo, original boards decorated in gilt, illustrated by Robert Ball. One of 250 numbered copies, this is number 186. In near fine condition. Founded in 1927 by Princeton University graduate Eugene V. Connett III, The Derrydale Press published several series of outdoor books for North American audiences during the first half of the 20th century. It was the only publishing house in the world devoted exclusively to sporting books. Forester's My Shooting Box contains fifteen stories of the hunt, including: English and American Game, Cock Shooting, The Elms, A Pic Nic, and Won in a Canter. (Inventory #: 116381)
$250.00 add to cart or Buy Direct from
Raptis Rare Books
Share this item

They Came to Baghdad.

London : Collins Crime Club , 1951
(click for more details about They Came to Baghdad.)
View all from this seller>