Last Train From Berlin: An Eye-Witness Account of Germany at War. 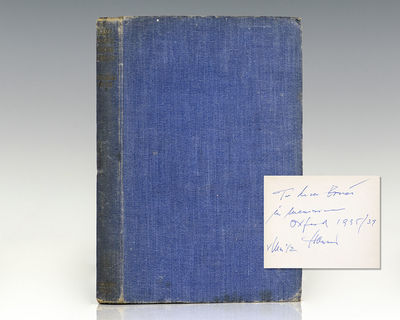 by Smith, Howard K
London: The Cresset Press, 1942. First edition, early printing of Smith's sensational best-selling work. Octavo, original cloth. Presentation copy, inscribed by the author on the front free endpaper. In very good condition. Howard K. Smith worked as a young reporter in Berlin during Hitler's rise to power, and for the first two years of the Second World War. Finally granted a visa to leave the country on December 7th, 1941, he set down to write about everything censors had forbidden about the physical, emotional, and psychological manipulation of the German people by Hitler, Goebbels, and their lackeys. Smith's first book, it became an American best-seller and was reprinted in 2001, shortly before Smith's death. (Inventory #: 116263)
$200.00 add to cart or Buy Direct from
Raptis Rare Books
Share this item

1906
(click for more details about Enrico Caruso Signed Postcard.)
View all from this seller>