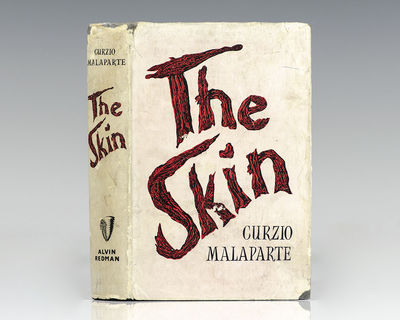 by Malaparte, Curzio
London: Alvin Redman Limited, 1952. First edition of this classic work. Octavo, original cloth. Translated from the Italian, La Pelle, by David Moore. Very good in the rare original dust jacket. The book begins in 1943, with Allied forces cementing their grip on the devastated city of Naples. The sometime Fascist and ever-resourceful Curzio Malaparte is working with the Americans as a liaison officer. He looks after Colonel Jack Hamilton, "a Christian gentleman ... an American in the noblest sense of the word," who speaks French and cites the classics and holds his nose as the two men tour the squalid streets of a city in ruins where liberation is only another word for desperation. Veterans of the disbanded Italian army beg for work. A rare specimen from the city's famous aquarium is served up at a ceremonial dinner for high-ranking Allied officers. Prostitution is rampant. The smell of death is everywhere. "In the literary work of Malaparte there is nothing that can be related to the normal plane of reason. He is a talented, vigorous writer, with a wonderfully powerful imagination." - The New York Herald Tribune. (Inventory #: 116391)
$375.00 add to cart or Buy Direct from
Raptis Rare Books
Share this item