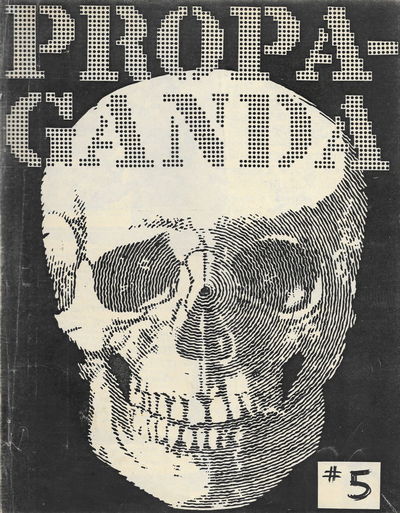 by Motown, Pamla; Jim O’Connor
Issue no. 5 (based on the cover dates of issues 3 and 4, this should be the January-April '83 issue). Staple-bound self-wraps, 21.7 by 27.9 cm, 16 pp. incld. wraps, illus. Very good with light wear at the corners and edges and the last page is detached. The fifth issue of Poseur's second-generation zine features a bunch of reader letters and ten pages of photos from Poseur's "Battle of the Jackets" in November 1982. The battle brought together Cali punks to show off their patched, pinned, painted, and metal-studded leather jackets. There are some awesome – albeit xeroxed – images of leathers with graphics that include the Anti-Nowhere League, Discharge, Sex Pistols, Riot!, Vice Squad, The Exploited, G.B.H., Subhumans, The 4-Skins, Cockney Rejects (the winning jacket), and many more. From the punk fashion shop founded by British designers Pamla Motown and Jim O'Connor in 1978 on Sunset Boulevard. Prior to teaming up with O'Connor and founding their own firm, Motown was working for the London boutique Mr. Freedom which opened in 1969.1 Motown and O'Connor designed clothing for mass-market retailers, private clients like members of the band Roxy Music, and a line of punk T-shirts for Macy's. Upon moving to Los Angeles, the team founded Poseur on Sunset Blvd. When the shop moved to Melrose Avenue in the early 1980s, it helped put that famous street on the map. Their catalogs featured a variety of punk and new wave buttons, stickers and T-shirts, as well as studded leather wristbands, bondage pants and shirts, a few sweatshirts and ties for the mods, etc. Poseur was probably the first one-stop-mail-order-shop in the United States for punk, new wave and rock attire and accessories. While Pam and Jim were always up front about their business—they were called Poseur after all, and their zine was Propa-ganda—they were one of the few outlets for young American punks looking for Sex Pistols and Black Flag buttons, Fear T-shirts, and Crass and Exploited stickers. And if you wanted a Sid Vicious chain necklace (you could have just gone to the hardware store), they had you covered. (Inventory #: 3701)
$100.00 add to cart Available from Bay Leaf Books
Share this item