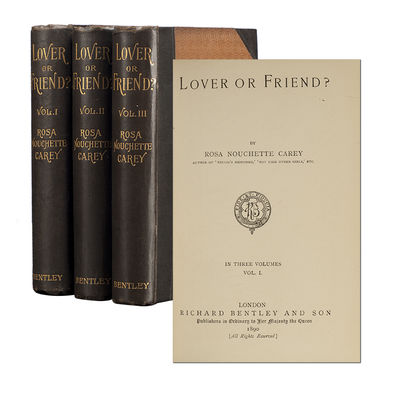 by Carey, Rosa Nouchette
London: Richard Bentley and Son, 1890. First edition. Publisher's original half brown cloth over patterned cloth boards. Gilt lettered spines. Publisher's original design gray printed endpapers. Spines very slightly cocked, otherwise fine. In three octavo volumes (180 x 113 mm) collating [4], 324; [4], 310; [4], 309, [1]. Scarce in trade and institutionally, OCLC reports only 11 libraries with this didactic novel. A very popular novelist in her own time, Rosa Nouchette Carey's ambition was "to try to do good and not harm by my works, and to write books which any mother can give a girl to read" (Black). Indeed, at a time when novels aimed at female readers were often decried as overly sensational at worst or frivolous at best, authors like Carey sought to infuse the genre with meaningful content. Marked by pious tone, domestic subject matter, and a large number of female characters, Lover or Friend? also "depicts the frustrations of women with some sympathy, exploring the pains of living up to high ideals and the psychic cost of self-abnegation" required to meet the Victorian standard of femininity (ODNB). Carey drew on her own experiences to create such work. Born to a comfortable merchant family, she was educated at the Ladies' Institute of St. John's Wood; but when her mother died in 1870, she and her other unmarried sister were saddled with the task of raising children not their own. Her writing career aside, caretaking her siblings and their children shaped the remainder of her life. Despite novels like Lover or Friend? encouraging female readers to find desirable, stable marriages and tend their own homes, Carey never did this herself. Her work fell out of popularity during the rises of modernism and early waves of feminism. But scholars are returning to it as an example of how "gender politics of the time were fascinatingly contradictory, and that Carey attracted so many readers precisely because she mingled a reassuringly traditional message with invigorating hints of a new model of womanhood" that didn't rely on the approval of or connection to men (Schaffer). (Inventory #: 3585)
$1,500.00 add to cart or Buy Direct from
Whitmore Rare Books
Share this item