The Life and Works of Alfred Lord Tennyson (in 12 vols) 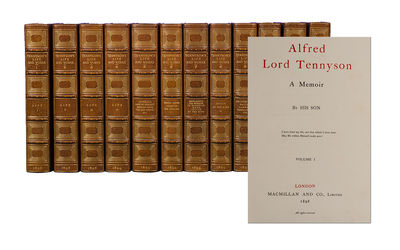 by Tennyson, Alfred, Lord
London: Macmillan and Co, 1899. Edition de Luxe., one of 1,050 sets. Twelve octavo volumes (8 9/16 x 5 11/16 inches; 217 x 146 mm). Finely bound by Bayntun of Bath ca. 1920 (stamp-signed on front turn-in) in full brown crushed levant morocco, covers decoratively ruled in gilt, spines with five raised bands, decoratively ruled and lettered in gilt in compartments, gilt board edges and turn-ins, brown silk endpapers and liners, all edges gilt. Title-pages printed in red and black. Illustrated with twelve frontispieces and a facsimile of Tennyson's handwriting. One small (one inch) split at top of front joint of volume one, some light marginal foxing, otherwise a very fine set in a handsome binding. Alfred Tennyson, 1st Baron Tennyson, FRS (1809-1892) was Poet Laureate of Great Britain and Ireland during much of Queen Victoria's reign and remains one of the most popular British poets. Tennyson excelled at penning short lyrics, such as Break, Break, Break, The Charge of the Light Brigade, Tears, Idle Tears and Crossing the Bar. Much of his verse was based on classical mythological themes, such as Ulysses, although In Memoriam A.H.H. was written to commemorate his friend Arthur Hallam, a fellow poet and student at Trinity College, Cambridge, after he died of a stroke aged just 22. Tennyson also wrote some notable blank verse including Idylls of the King, Ulysses, and Tithonus. During his career, Tennyson attempted drama, but his plays enjoyed little success. A number of phrases from Tennyson's work have become commonplaces of the English language, including "Nature, red in tooth and claw" (In Memoriam A.H.H.), "'Tis better to have loved and lost than never to have loved at all", "Theirs not to reason why, theirs but to do and die", "My strength is as the strength of ten, because my heart is pure", "To strive, to seek, to find, and not to yield", "Knowledge comes, but Wisdom lingers", and "The old order changeth, yielding place to new. (Inventory #: 3793)
$3,000.00 add to cart or Buy Direct from
Whitmore Rare Books
Share this item