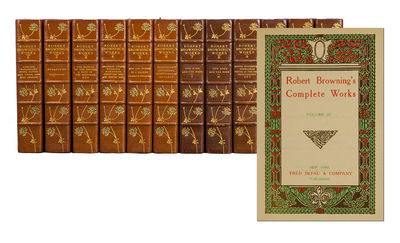 by Browning, Robert
New York: Fred De Fau & Company, 1910. First Thus. Fine. Assisi Edition. Limited to 100 numbered sets (of which this is number 11). Twelve octavo volumes (8 1/2 x 5 5/8 in; 218 x 142mm). Publishers three-quarter brown morocco gilt over brown silk boards, with compartments decorated with green inlaid flowers outlined in gilt and with swooping gilt stems. Top edges gilt. Six volumes mildly and uniformly sunned to warm brown. Photogravure plates throughout, including frontispieces, in two states. A fine set. Robert Browning (1812- 1889) was an English poet and playwright whose mastery of dramatic verse, and in particular the dramatic monologue, made him one of the foremost Victorian poets. His poems are known for their irony, characterization, dark humor, social commentary, historical settings, and challenging vocabulary and syntax. The speakers in his poems are often musicians or painters whose work functions as a metaphor for poetry. Here, his most influential works are drawn together, beautifully bound. Fine. (Inventory #: 3577)
$3,250.00 add to cart or Buy Direct from
Whitmore Rare Books
Share this item