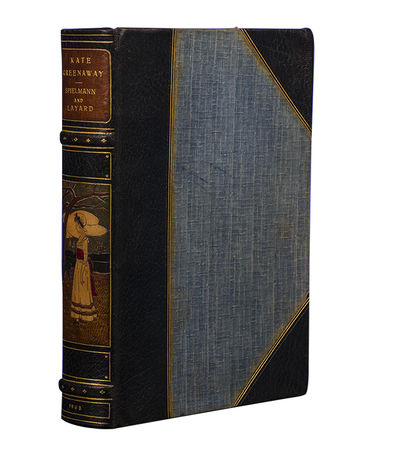 by [Kate Greenaway] M.H. Spielmann and G.S. Layard
London: Adam and Charles Black, 1905. First edition. Near Fine. Bound ca. 1905, most probably by Birdsall of Northampton, in three-quarter dark blue morocco over light blue cloth boards ruled in gilt. Spine with two raised bands decoratively paneled in gilt. The largest panel (3 3/4 x 2 inches) with a typical Kate Greenaway girl onlaid in various different colored morocco. Original color pictorial endpapers, top edge gilt. Octavo (8 7/8 x 6 1/4 inches; 225 x 160 mm.) Collating [xx], 300, [1], [1, blank] pages. Color frontispiece and fifty- three color plates after Kate Greenaway, with descriptive tissue guards, and numerous black and white illustrations, including thirty-four half-tone plates. Front and back blank leaves slightly foxed, some very minor and light marginal staining, otherwise near fine. An excellent example. Greenaway's illustrative style became incredibly well-known and much beloved during the Victorian period; and her work graced numerous children's books and almanacs. Here, her work is beautifully presented in a Birdsall binding. The roots of Birdsall of Northampton "stretch back to the early eighteenth century but it was in 1792 that John Lacy's Northampton bindery was acquired by William Birdsall, continuing in his family until 1961... In Birdsall's heyday, Gerring reported a staff of 250 engaged in making ladies handbags, fancy boxes, and stationary; as well as all types of bookbinding. The firm seemed always ready to experiment and careful records and samples were kept by Richard Birdsall, great-great-nephew of the founder, until he died in 1909... The firm's collection of over 3,000 finishing tools passed to the University of Toronto" (Bookbinding in the British Isles II #262, and #321). Near Fine. (Inventory #: 3567)
$1,500.00 add to cart or Buy Direct from
Whitmore Rare Books
Share this item