Jacqueline Kennedy Detailed Oleg Cassini Ledger of Fabric Samples, Including Poignant Entries Before and After Assassination 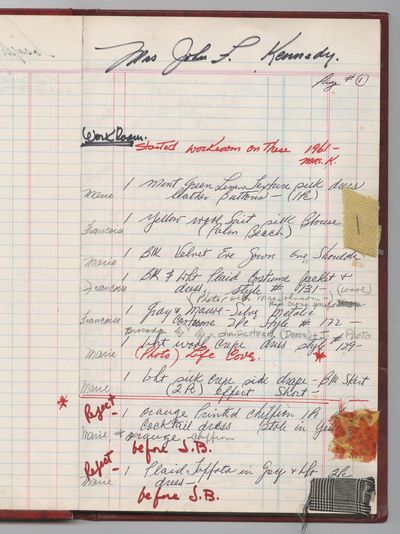 Jacqueline Kennedy Detailed Oleg Cassini Ledger of Fabric Samples and Datelines, Including Poignant Entries Before and After Assasination

Perfect and important red banking ledger book, created by Oleg Cassini's staff and with fabric samples kept by Joseph Boccheir, design coordinator for Oleg Cassini. 7.75" x 12.75". The first internal pages stating "Work done for Kennedy". Hand paginated. Left column indicates the "Work Room". The dates are located in various places, some of the entries indicate the occasion, and/or if the outfit was imaged or displayed by a magazine. Dozens of entries are recorded, many containing small fabric swatches pinned next to the entry. Approximately 50% of the book has blank pages dated shortly after the JFK assassination. Towards the back of the book begins a small set of entries for other Kennedy ladies, Princess Lee Radziwill, Mrs. Sargent Shriver, Mrs. Ted Kennedy, Mrs. Stephen Smith, (Stephen Smith played an active role in JFK's 1960 presidential campaign, and was working as Kennedy's campaign manager for re-election in 1964), among a few others.

Approximately 17 pages all devoted to model sessions for Mrs. Kennedy's designs, accomplished in pencil, pen and with annotations in red ink noting the designs rejected, or noting when they were worn. A remarkable log of Cassini's workroom as Camelot thrived.

In 1961, Jacqueline Kennedy asked fashion designer Oleg Cassini to be her personal courtier. It was an appropriately high-profile choice: Cassini had already achieved fame as a Hollywood costume designer in the 1940s and '50s. He dressed stars like Shirley Temple, Marilyn Monroe, Rita Hayworth, and Joan Crawford, and he was even briefly engaged to Grace Kelly. She ended their engagement to marry Prince Rainier III of Monaco. Cassini accepted the position, of course, and became known as Jackie's "Secretary of Style." The First Lady attended JFK's Inaugural Gala that first year in a satin gown designed by Cassini that would later be named one of the "50 Dresses That Changed the World" by London's Design Museum. Cassini transformed Kennedy into one of the most stylish women of her era, cementing her status as a fashion icon.
This phenomenal book is like reviewing a time machine, with many of the actual dresses still appearing as public images of Jacqueline Kennedy on the internet. We had fun matching up some of the public images available with the ledger notes from this book and even located some of her more iconic fashion statements. Such examples we located, and have included images for review only with this listing:

(For her state visit to India in 1962, Kennedy embraced the country's love of vibrant color. )
On page 7: "1 Wht silk gown trimmed in white satin plus stole (fringed style)." Front page news + Life Magazine India
(As her state visit in India continued, three fashion "go-to's" remained: pearls, white gloves, and many bow details.)
Page 3: "Mint green silk eve gown."
(This appears to have been worn in 1962, at a White House dinner)

But one pauses as the sobering date nears the death of JFK., where suddenly there is a large 1 month gap in entries, between just prior to her husband's assassination from 11/13/1963, which eerily foreshadows the famous pink dress, sample included, to 12/16/1963 and 1/17/1964 in which her wardrobe moved from gala clothes to those of 8 pairs of Sunglasses and dark sweaters as shown on page 17 of the itemized list. Our sample just over a week before the assassination is indeed a pink material one could surmise that maybe she was going with a Cassini dress for her trip to Dallas but switched at the last minute and went with the now famous Chanel pink suit. That suit is now in the National Archives complete with bloodstains. There is information that she wore the pink Chanel suit on an occasion before the assassination so perhaps the Cassini pink suit was not finished in time so she used an old standby.


(click for more details about Captain George S. Patton Writes to His Father about the New Tank School He is Creating in France)

Einstein Appreciates a Birthday Gifts that Causes Him to Recall – and Sketch – a Childhood Dexterity Game, ‘Pigs into the Sty’


(click for more details about Einstein Appreciates a Birthday Gifts that Causes Him to Recall – and Sketch – a Childhood Dexterity Game, ‘Pigs into the Sty’)
View all from this seller>