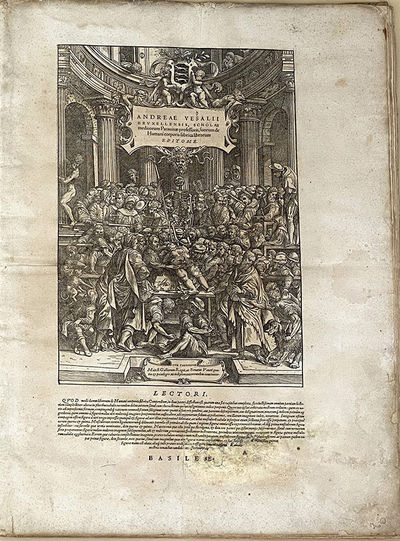 by Vesalius, Andreas
Basel: Oporinus, 1543. Vesalius, Andreas (1514-64). Suorum de humani corporis fabrica librorum epitome. Broadsheet folio. [14]ff. signed A-M [N-O],with woodcut title, large woodcut portrait of Vesalius, 9 full-page anatomical woodcuts, 2 full-page figures of a nude male and female, 2 sheets of woodcut anatomical details for cutting out & mounting, and several woodcut initials. Basel: Oporinus, June 1543. 553 x 407 mm. Original limp vellum creased horizontally and vertically, some staining; preserved in a cloth folding case. All sheets with horizontal fold-marks across center (as in all copies) as well as vertical fold-marks, repair on title-page affecting several words in the "Lectori" paragraph and the "Basileae" at the foot, with a few letters in ink facsimile, a few lacunae in the title-leaf and one or two other leaves, some staining and toning. Overall a very good, well-preserved and complete copy with large margins; except for the comparatively minor title repair, this copy is unrestored. First Edition of the extremely rare Epitome. "[Vesalius's] Fabrica may be the only masterwork in the history of medicine and science that was published simultaneously with a synopsis prepared by the author. Vesalius designed his Suorum de humani corporis fabrica librorum epitome to serve as a more affordable outline key to the encyclopedic and expensive Fabrica. In his dedication to Prince Philip, Vesalius stated that ‘I have made [the Epitome] to be as it were a foot-path beside the larger book, and as an index of what is set forth in it.' Unlike the Fabrica, however, which begins with the skeletal system and works outward, the Epitome's approach to anatomy is topographical: That is, the muscles are first discussed, followed by a combined study of the vessels, nervous system and viscera. The various parts of the anatomy are illustrated in nine woodcuts, divided into two skeletal, four muscular, and two circulatory charts, plus a neurological chart. The skeletal, muscular and one of the circulatory plates are similar, but not identical, to plates found in the Fabrica: the Epitome's plates are some sixty millimeters taller, the figures are in slightly different attitudes and less space is devoted to background scenery (leaf K1 duplicates the Fabrica's thinking skeleton, but with the inscription on the pedestal changed). The remaining circulatory plate and the neurological plate are reproduced, with different text, on the two folding plates found in the Fabrica . . . In addition to these nine anatomical plates, the Epitome includes two woodcuts of a nude male and nude female figure, accompanied by long descriptions of the surface regions of the body; nothing like them appears in the Fabrica. The Epitome's title-page woodcut and portrait of Vesalius are from the same blocks used in the larger work. "Published in a larger format than the Fabrica, in the form of separate sheets to be used for wall charts, and not necessarily bound, the Epitome is considerably rarer than the Fabrica today. Many copies of the Epitome are incomplete, and the last two unsigned sheets ([N]1 and [O]1), printed with individual parts of the body to be cut out and assembled into two figures, male and female, are especially rare" (Norman / Grolier , 100 Books Famous in Medicine, 18). Cushing traced only 22 copies of the Epitome (2 of them printed on vellum), without, however, commenting on their completeness or otherwise. To these are to be added the three copies listed in Grolier, Heirs of Hippocrates, and Cockx Indestege's Belgian census. All copies of the Epitome (including the vellum copy in the British Museum) have sheets that bear traces of having been folded in half horizontally, as this is how the publisher sent the work's oversize single sheets to their recipients. Adams V607. Choulant-Frank, pp. 180-81. Cockx Indestege, Vesalius, 46 ("leaves L with the female nude and [O] with one set of figures to be cut out, wanting"). Cushing, Vesalius, VI B-1. Garrison-Morton.com 376. . (Inventory #: 45492)
$300,000.00 add to cart or Buy Direct from
Jeremy Norman & Co.
Share this item
Jeremy Norman & Co., Inc.
Offered by

1847
(click for more details about Projet de bélier d'épuisement. Archive of drawings and documents)
View all from this seller>