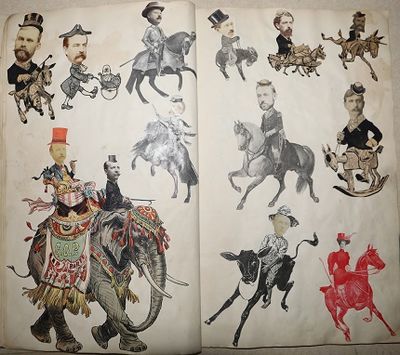 NA
NA. Good. Fantastic fanciful promotional mixed media mock-up made of cut-outs, photos (also mostly cut out) and original artwork (pen-and-ink). Folio, 45 by 29 cm. 52 pages with content, including cover, front and back, and excluding a number of blank pages. Promoted are all aspects of this circus, which captured the wide diversity of circus acts at the time, including animal acts, both wild animals and trained animals (dogs, goats, cats, horses, elephants), dancers and acrobats, clowns and other comedians, musicians (a brass band), vaudeville and minstrel acts, etc. Diverse as the circus purported to be, a takeaway from the booklet is the salience of equine-related acts in particular. But more than the spotlighting of specific acts, the mock-up brochure captures the joy and exuberance of the circus. The booklet could be taken for just a cohesive scrap book but for the consistent promotional thrust on behalf of the Smith circus as well as the artistic panache of the enterprise. Original artwork is a comparatively small quotient of the contents, but the way the various pages are composed, and in particular the marrying of photos, mostly of faces, to cut-outs, make this a visually exciting document. We do not know how exactly this circus made use of this mock-up. Our best guess is that they used it in the production of publicity posters and flyers, both for the specific engagement alluded to in Thomaston, and probably afterward, with minor modifications based on the location and who might be involved. Some specific acts are referred to in the document, such as Professor Wilhelm Starr, Zabo the Woman from Mars, the seven electrical dolls, and Professor Joseph Eugene. Condition: cover, meaning first page really, detached, with heavy soiling, including dampstaining, large holes where staples formerly attached it to rest, and a fringe of shallow short tears. Also minor paper loss to mounted cut-out. (Inventory #: 006738)
$2,500.00 add to cart Available from
White Fox Rare Books & Antiques
Share this item
White Fox Rare Books and Antiques
Offered by

Watercolor of deer in a forest


(click for more details about Watercolor of deer in a forest)

Coventry and London : Thomas Stevens
(click for more details about [Framed Stevengraph] The Good Old Days)
View all from this seller>