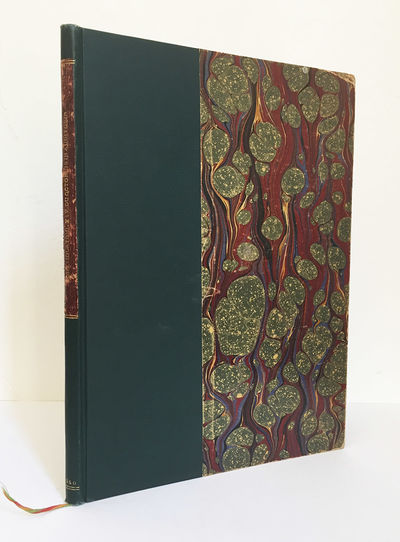 by LATOMUS, Bartolomaeus (1485-1570)
A BELGIAN HUMANIST TRAVELS THROUGH ITALY
4to (217x157 mm). [8] leaves. Collation: A-B4. Printer's device on title page. Early 20th-century half cloth, some light browning, a fine copy from the library of Abel Lefranc.
VERY RARE FIRST EDITION of this speech held on October 25, 1540 in the Collège de Sainte- Barbe in Paris. In it the Belgian humanist gives an account of his travel to Italy. In autumn 1539 Latomus was granted leave to visit Italy at the king's expenses. Over Lyons and the Mont Cenis he attained Turin and continued to Milan, Brescia, Padua (where he listened to the lectures of Alessandro Sozzini and met the scholar Lazzaro Buonamici), Verona, Venice (where he attended the lectures of Giovanni Battista Egnazio), Ferrara (where he was welcomed by Renée de France and where he met Celio Calcagnini), Bologna, Florence, Siena and Rome. In Bologna, where he is documented on February 11, 1540, he appears to have received a legal doctorate. On his way back to Paris he passed through Basel, visiting Johannes Oporinus, one of his printers and stopped in Strasbourg with his friend Johann Sturm. Before returning to Paris in October 1540 he accompanied the Strasbourg reformers to the Haguenau conference. Later in this speech he returns to topics already developed in his inaugural lecture of 1534, Oratio de studiis humanitatis (for which he obtained an encouraging letter by Erasmus): humanistic studies should be a preparation for life, they should not form specialists, but open the mind and allow those who pursue them to accomplish with dignity a variety of charges. The speech closes with a eulogy on Guillaume Budé, who had died some months earlier
"Après une année de congé passée en Italie Latomus reprend sa place à sa chaire du Collège royal. Il commence son discours par remercier ses auditeurs: leur présence prouve que le collège est resté un lieu d'élection où les lettres sont honorées. Il fait ensuite un bref éloge de celui qui a bien voulu assumer sa charge pendent son absence, Pierre Gallant. Puis, nous voilà in medias res. La vrai sagesse, dit-il, l'expérience profonde et vécue, on ne la trouve pas dans les livres; les voyages jouent dans son acquisition un rôle bien plus important" (L. Bakelants, Latomus: deux discours inauguraux, Bruxelles, 1951, p. 15).
Bartholomaeus Latomus was born at Arlon, on the border between Belgium and Luxembourg. He matriculated in Freiburg i. Br. and studied law under Ulrich Zasius. At about the same time he met Erasmus at nearby Basel. From 1518 he was lecturer in the Freiburg faculty of arts. In 1522 he went to Trier, where he may have continued his studies while tutoring other students. He took part in the defense of Trier against Franz von Sickingen and described the events in an epic poem (1523). In 1526 he matriculated in Cologne and soon was lecturing on Livy and Cicero. In August 1530 he matriculated in Louvain and continued his study of Latin authors in the Collegium Trilingue as a disciple and friend of Conradus Goclenius. In July 1531 Latomus was appointed lecturer in the Collège de Sainte-Barbe in Paris under André de Gouveia. Among his students were Jean Calvin, Ignatius of Loyola, François Xavier, Clément Marot, François Rabelais and Pierre de la Ramée. When the latter invited him to follow him to the Collège de Guyenne at Bordeaux, Guillaume Budé retained him in Paris by securing him a royal professorship. After his travel to Italy, in the summer of 1541 he went to the diet of Regensburg and there met his former student Johann Ludwig von Hagen, now archbishop of Trier, whose services he entered in 1542. In 1548 Latomus accepted an imperial appointment as assessor at the Reichskammergericht in Speyer. He attended the diet of Speyer in 1556 and was also a speaker for the Catholic party at the colloquy of Worm in 1557. Latomus deserves his reputation as one of the leading Latin scholars of his day, particularly in view of his work on Cicero (cf. L. Roersch, Barthélemy Latomus, le premier professeur d'éloquence latine au Collège Royal de France, in: "Bulletins de l'Académie Royale des Sciences, des Lettres et des Beaux-Arts de Belgique", 3e s., 14, 1887, pp. 132-176; see also E. Wolff, Un humaniste luxembourgeois au XVIe siècle, Barthélémy Latomus d'Arlon, Luxembourg, 1901-1902, passim).
This copy comes from the library of the great literary scholar of French Renaissance Abel Lefranc (1863-1952) and has his entry of ownership on the inner front board. Lefranc mentions his copy (the third then known) in his article Les commencements du Collège de France ("Mélanges d'histore offerts à Henri Pirenne", Paris, 1926, p. 303).Bibliotheca Belgica, Bruxelles, 1964, III, p. 698-700, no. L-716; Universal STC, 186409; B. Moreau, Inventaire chronologiques des éditions parisiennes du 16ème siècle, 1536-1540, Paris, 2004, no. 1856; P. Gasnault, ed., Guillaume Budé: Exposition Bibliothèque Nationale, Paris, 1968, p. 44, no. 181. (Inventory #: 80)
$1,800.00 add to cart Available from Govi
Share this item