Secrets of Judging the Acting of the Stars 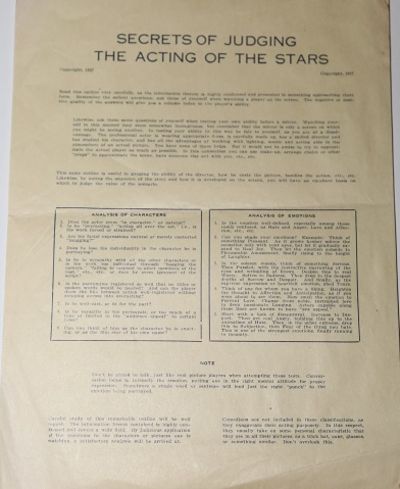 1927. NA. Very Good. An instruction sheet issued as the soon-to-end Silent Era was cresting and about to be swiftly superceded with the advent of "talking pictures". Unknown whether this short primer was intended primarily for movie fans, for actors and other aspirants to the movie business, or both, but surely it was some form of promotional tool. Its composition undoubtedly reflects an increased seriousness applied to the medium, and a cultivation of that attitude by the industry. Also, one can sense from the sheet a growing appreciation of the special skill set that might be required for acting in movies without spoken dialogue, and its advice concisely encapsulates the criteria that movie critics were generally applying to their analysis of the medium. In essence, the short essay, for that is what it essentially is, recognizes the need for some artificiality with the absence of speech but still embraces a naturalistic effect, and put another way, decries over-emoting and over-acting such as the medium most certainly encouraged in its earlier days. Accompanying this sheet are 12 publicity photos, which we assume were issued with the advisory sheet, and if they were so issued, the idea was for the student to apply the principles set forth in the advisory to these silent actors, who one trusts were generally held out as exemplifying the principles. Some of the still well-known actors among those in the photographs are Gloria Swanson, Mary Astor, Gary Cooper, Norma Shearer, Greta Garbo, John Gilbert, and John Barrymore. Folded sheet, with text on only one side, plus 12 silent film publicity photos. Condition: the sheet has a few minor flattened creases. The photos have moderate wear. (Inventory #: 006746)
$350.00 add to cart Available from
White Fox Rare Books & Antiques
Share this item
White Fox Rare Books and Antiques
Offered by

Watercolor of deer in a forest


(click for more details about Watercolor of deer in a forest)

Coventry and London : Thomas Stevens
(click for more details about [Framed Stevengraph] The Good Old Days)
View all from this seller>