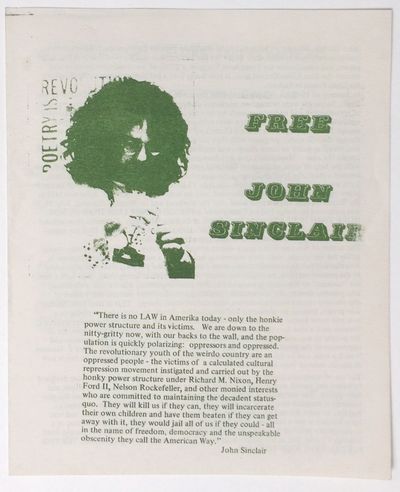 by [Sinclair, John]
Ann Arbor, MI: John Sinclair Defense Committee; White Panther Party National Headquarters, 1970. 7x8.5 inch four-page brochure, very good. Undated, but a reference to success at keeping Huey Newton out of the gas chamber suggests 1970. Also provides contact information for the Black Panther Party's United Front Against Fascism. The chairman of the White Panther Party, Sinclair was sentenced to almost a decade in prison for possession of two joints. A quote from Sinclair on the cover states "There is no LAW in Amerika today-only the honkie power structure and its victims. We are down to the nitty-gritty now, with our backs to the wall, and the population is quickly polarizing: oppressors and oppressed. The revolutionary youth of the weirdo country are an oppressed people-the victims of a calculated cultural repression movement instigated and carried out by the honkie power structure under Richard M. Nixon, Henry Ford II, Nelson Rockefeller, and other monied interests who are committed to maintaining the decadent status quo. They will kill us if they can, they will incarcerate their own children and have them beaten if they can get away with it, they would jail all of us if they could-all in the name of, freedom, democracy, and the unspeakable obscenity they call the American Way.". (Inventory #: 253142)
$60.00 add to cart or Buy Direct from Bolerium Books
Share this item

[Photograph of a convention of the Filipino-American fraternal organization]

Seattle : Jackson Studio , 1937
(click for more details about [Photograph of a convention of the Filipino-American fraternal organization])

Chicago : University of Chicago Press , 1990
(click for more details about Four Thousand Years of Chinese Calligraphy)
View all from this seller>