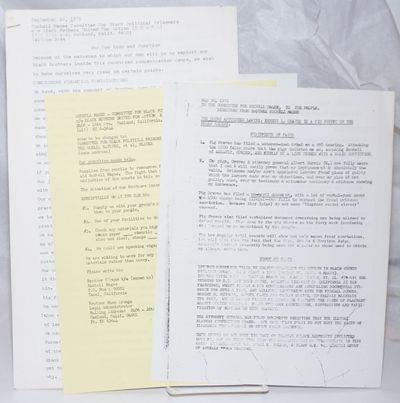 by Ruchell Magee Committee for Black Prisoners; Black Mothers United for Action
Oakland: the Committee; BMUFA, 1971. Three items mimeographed for distribution by supporters of Magee, the sole prisoner and Black Panther member to survive the Marin County Courthouse incident in 1970 (described by the participants as a slave rebellion). Though two organizational names are listed, they share a single PO Box. Two are 8.5x11 inches, the other 8.5x14 inches; crudely mimeographed from typescript but very good, rather hastily assembled with numerous typos. The group includes: A six-page packet titled "Our position and function," a two-page packet titled "The court appointed lawyer, Ernest L. Graves is a pig puppet of the Regan (sic) regime," and a single-sheet leaflet announcing that the name of the organization is soon to be changed to "Committee for Black Political Prisoners and for Black Prisoners of War Around the World, Nations, et al, Blacks," and seeking donations of printing supplies. A small sample of literature produced by the organization of activists supporting Magee, whose trial paralleled that of Angela Davis but was less successful for the defendant. Dissatisfied with his appointed attorneys, he eventually obtained the right to represent himself. He was ultimately convicted of kidnapping and remains in prison to this day. (Inventory #: 253423)
$250.00 add to cart or Buy Direct from Bolerium Books
Share this item