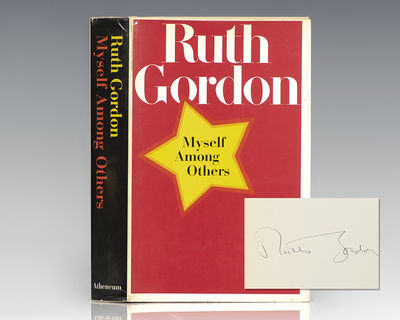 by Gordon, Ruth
New York: Antheneum, 1971. First edition of the great actress and playwright's autobiography. Octavo, original cloth. Signed by the author on the second free endpaper. Near fine in a near fine dust jacket. Jacket design by Janet Halverson. Photograph by Eva Rubinstein. Born in Quincy, Massachusetts in 1896, Ruth Gordon began her career performing on Broadway at age nineteen. Known for her nasal voice and distinctive personality, she gained international recognition and critical acclaim for film roles that continued into her seventies and eighties. In addition to her acting career, Gordon wrote numerous plays, film scripts, and books, most notably co-writing the screenplay for the 1949 film Adam's Rib. Gordon won an Oscar, an Emmy, and two Golden Globe Awards for her acting, as well as received three Academy Award nominations for her writing. (Inventory #: 115091)
$40.00 add to cart or Buy Direct from
Raptis Rare Books
Share this item