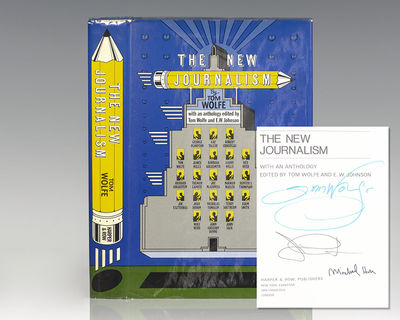 by Wolfe, Tom and E.W. Johnson; Didion, Joan; Michael Herr
New York: Harper & Row, Publishers, 1973. First edition of this anthology of new journalism. Octavo, original cloth. Signed by Tom Wolfe, Joan Didion and Michael Herr on the title page. This work includes selections by Truman Capote (from In Cold Blood), Joan Didion (from Slouching Towards Bethlehem), Michael Herr (Khesanh), Terry Southern (Twirling at Ole Miss), Hunter S. Thompson (The Kentucky Derby is Decadent and Depraved), Norman Mailer (from Armies of the Night), Tom Wolfe (from The Electric Kool-Aid Acid Test), George Plimpton (from Paper Lion), among others. Fine in a near fine dust jacket with a touch of shelfwear. Tom Wolfe introduces and exults in his generation's journalistic talent: Truman Capote inside the mind of a psychotic killer Hunter S. Thompson skunk drunk at the Kentucky Derby Michael Herr dispatching reality from the Vietnam killing fields Rex Reed giving the star treatment to the ageing Ava Gardner As well as Norman Mailer, Joe Eszterhas, Terry Southern, Nicholas Tomalin, George Plimpton, James Mills, Gay Talese, Joan Didion and many other legends of tape and typewriter telling it like it is from Warhol's Factory to the White House lawn, from the saddle of a Harley to the toughest football team in the United States. (Inventory #: 116398)
$2,200.00 add to cart or Buy Direct from
Raptis Rare Books
Share this item