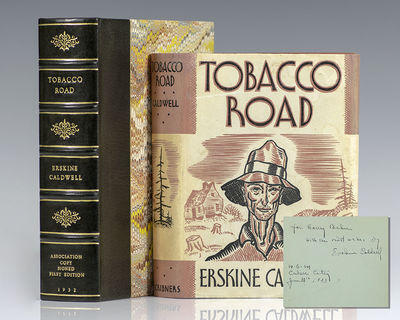 by Caldwell, Erskine
New York: Charles Scribner's Sons, 1932. First edition of Caldwell's classic work. Octavo, original cloth. Association copy, inscribed by the author on the front free endpaper, "For Harry Behn with the best wishes of Erskine Caldwell M.G.M. Culver City June 10th 1933." The recipient, Harry Behn was a screenwriter who wrote classics such as The Big Parade and Hell's Angels. Behn collaborated with Caldwell on a screenplay (Call it Experience, p. 157). Near fine in a near fine dust jacket with some light expert restoration. Housed in a custom half morocco clamshell box. Rare and desirable signed and inscribed. Unsentimentally realistic, this classic novel is a reflection of the effects of poverty on tenant farmers in the South during the Great Depression. It focuses on the Lester family, former cotton farmers who continue to live on their ancestors' plantation even though it has long ceased to be prosperous. Jeeter and Ada Lester have 17 children, two of whom still live at home: Ellie May, their only unmarried daughter who has a cleft lip, and Dude, their youngest son who is mentally handicapped. The family's antics, while at times vile and perverse, depict the racism and moral ambiguity that existed among some impoverished Southerners at that time and represent Erskine Caldwell's critique of the failed economic system and its consequences. It was the basis for the Broadway show which ran from 1933 to 1941 (then the longest-running play on record), and adapted into the 1941 film directed by John Ford. Named by Modern Library as one of the 100 greatest novels of the twentieth century. (Inventory #: 116873)
$8,000.00 add to cart or Buy Direct from
Raptis Rare Books
Share this item

A Pocket Full of Rye.

New York : Avon Book Division , 1960
(click for more details about Tristessa.)
View all from this seller>