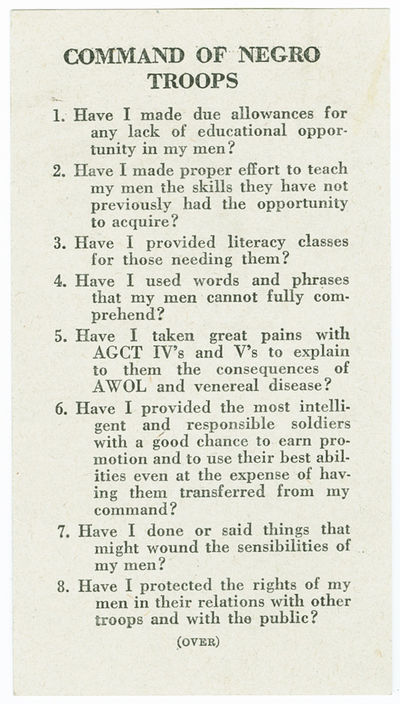 by [African Americana]: [World War II]
[Washington, D.C.]: GPO, 1944. Single sheet, 4 1/2 x 2 1/2 inches, printed on both sides. Printed on slightly thick paper stock. Minor soiling, else fine. A pocket-sized card designed to assist white officers commanding African-American units during World War II to communicate better with their troops and provide opportunities for unit success. The card contains a list of fifteen questions for white officers to ask themselves in their interactions with black troops. The first of these questions reads, "Have I made due allowances for any lack of educational opportunity in my men?" The fifth question relates to communication about being AWOL and contracting venereal disease. The tenth question asks the officer to make sure he is providing his "public relations officer with as many items as possible relating to commendable performances by my outfit and individual soldiers in it." The last two questions relate to making African-American troops understand the reasons for the war and the "paramount place of the war effort." The list is followed by the Government Printing Office job number, reading "16-38647-1." This list relates to, though seems to be separately-printed from, a nineteen-page pamphlet also entitled, COMMAND OF NEGRO TROOPS, published by the GPO in 1944. We can find no separate record for this card in OCLC. Assuming that it was directed at white officers of African- American units (not a big number to begin with), and being such an ephemeral item in itself, few copies likely survived the war. (Inventory #: WRCAM55819)
$250.00 add to cart or Buy Direct from
William Reese Co. - Americana
Share this item