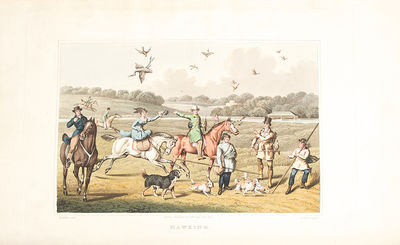 by ALKEN, Henry Thomas (1785-1851)
London: Thomas McLean ... Printed by W. Lewis, 1822. Folio. (19 x 12 inches). English and French titles (recto and verso of the same leaf), English and French text throughout. Hand-coloured engraved additional title, 50 hand-coloured aquatint plates by I. Clark after Henry Alken. Wear to endspapers from removed bookplate. Scattered very minor soiling, but without offsetting or foxing. Contemporary olive green straight grained morocco, covers elaborately panelled in gilt and blind and with a central sporting stamp in gilt by Knights, spine with wide semi-raised bands in seven compartments, lettered in the second, the others with a repeat decoration in gilt, marbled endpapers, gilt edges. Housed in a green morocco box. A fine example of the folio first edition of "Alken's most important work ... It must always form the cornerstone of any Alken collection" (Tooley). The plates and text between them offer a thorough survey of the sports practised in Great Britain in the first quarter of the nineteenth century. The subjects covered including riding, fox, stag and otter hunting, beagling, racing, falconry, various types of dogs and horses, shooting grouse, partridge, pheasant, snipe, wild-fowl, bittern, pigeon, fishing for pike, and salmon, fishing from a punt, prize-fighting, cock-fighting, badger, bear, and bull-baiting and perhaps most extraordinary of all: "owling." It is interesting to note that although both the artist and the author felt that it was necessary to record badger, bear and bull baiting they did not hold back from condemning all three sports as barbaric. The artist Henry Thomas Alken was born into what became a sporting artistic dynasty. He studied under the miniature painter J.T. Barber and exhibited his first picture (a miniature portrait) at the Royal Academy when he was sixteen. From about 1816 onwards he "produced paintings, drawings and engravings of every type of field and other sporting activity. He is best remembered for his hunting prints, many of which he engraved himself until the late 1830s ... To many, sporting art is 'Alken', and to describe his work or ability is quite unnecessary" (Lane). The plates, very carefully hand-coloured, are all aquatints by I. Clark, and retain all of the liveliness that is such a feature of this work. Litchfield 14; cf. Mellon/Podeschi 111; cf. Schwerdt I, p.19 & IV, p.4; Tooley 41; Lane British Racing Prints 75--6. (Inventory #: 38655)
$20,000.00 add to cart or Buy Direct from
Donald A. Heald Rare Books
Share this item
Donald A. Heald Rare Books
Offered by