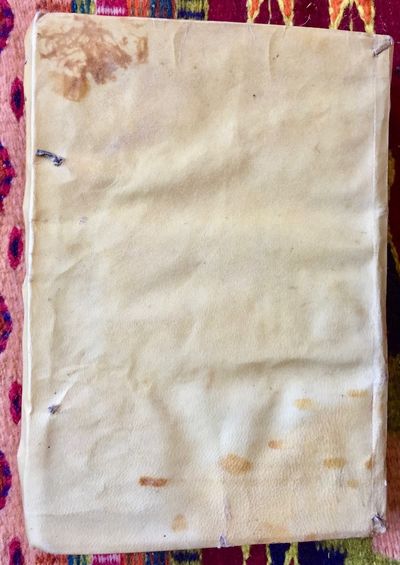 by Palafox y Mendoza, Juan de
Sevilla: Lucas Martin, 1691. Later printing. Octavo, 21 x 15cm, ff [32 incl. portrait leaf], pp 1 - 465, ff 17 (index). SIGNED BY VICEROY BUCARELI. First edition was 1682, but this is a lovely printing, with text in ornamental borders, many tailpieces (culs de lampe), and a fine engraved portrait of the author by Orozco, showing Palafox (1600 - 59) in his library. This is the spiritual autobiography of Palafox, who served as Bishop of Puebla, Mexico, as well as briefly Viceroy of New Spain. A bitter dispute with the Jesuits forced him to be recalled to Spain. This document was left by him at the Convent of Discalced Carmelites in Madrid, where he spent his last years. He was noted for his benign treatment of the indigenous people of Mexico, as well as donating his own library of some 5000 volumes toward the founding of the first public library in the New World, the Biblioteca Palafoxiana in Puebla, which continues to this day. He patronized the arts in Mexico as well, making Puebla the center of sacred music. His cause for sainthood has languished for over two centuries, supposedly because of Jesuit opposition, but he was finally beatified under Benedict XVI in 2011. This copy was the personal copy of the great Viceroy ANTONIO BUCARELI Y URZUA as is evidenced by his bold signature on the front free endpaper. [Palau 209802] Bound in the original vellum, title on spine (faded), paper fresh and free of foxing; previous owner's bookplate on front pastedown; last two pages of index show some insect damage at bottom of page with small loss of text. Very good copy. (Inventory #: 7530)
$1,650.00 add to cart Available from Plaza Books
Share this item

Schat-Chen / History, Traditions, and Narratives of the Queres Indians of Laguna and Acoma

Albuquerque, NM : Albright and Anderson , 1917
(click for more details about Schat-Chen / History, Traditions, and Narratives of the Queres Indians of Laguna and Acoma)
View all from this seller>