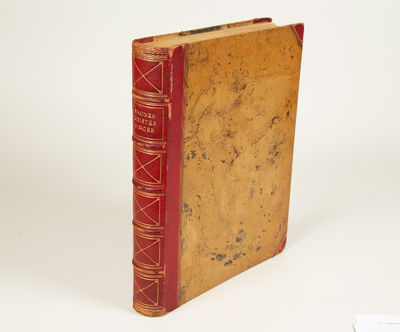 by WAGNER, Richard 1813-1883
Berlin: Drei Masken Verlag, 1923. Folio. Original publisher's quarter dark red morocco with marbled boards, raised bands on spine in decorative compartments gilt. 462 pp. + 1f. (colophon). Binding slightly worn, rubbed and bumped. Very minor signs of wear. In very good condition overall. Limited to 530 numbered copies, this no. 111. A "music drama" in three acts by Richard Wagner to his own libretto, Die Meistersinger was first performed in Munich at the Königliches Hof- und Nationaltheater on June 21, 1868. "The only comedy among Wagner's mature works, Die Meistersinger is a rich, perceptive music drama widely admired for its warm humanity but regarded with suspicion by some for its dark underside. Its genial aspect is immensely enhanced by the technical mastery displayed by Wagner at the height of his powers." Barry Millington in Grove Music Online. (Inventory #: 34921)
$2,750.00 add to cart or Buy Direct from
J. & J. Lubrano Music Antiquarians
Share this item