THE PACIFIC NORTH-WEST; A GUIDE FOR SETTLERS AND TRAVELERS: OREGON AND 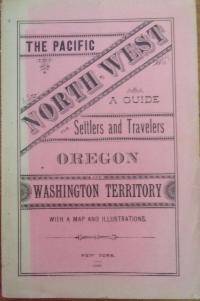 by OREGON RAILWAY AND NAVIGATION COMPANY
OREGON RAILWAY AND NAVIGATION COMPANY. THE PACIFIC NORTH-WEST; A GUIDE FOR SETTLERS AND TRAVELERS: OREGON AND WASHINGTON TERRITORY. New York: (Land Dept., Northern Pacific Railroad Co.), 1882. 8vo. Printed wrappers. Frontispiece plate, 81 pages. First edition. Scarce Western promotional travel guide to the Pacific North-West. Addressed to prospective settlers and travelers alike, this guide consists of historical, geographical, and agricultural information, and discusses at length matters such as commerce, climate, education, taxes, prices, and the regions of the Pacific North-West. Each county is described and suggestions are provided to prospective emigrants such as, "In mercantile pursuits, the opening is good for men of enterprise and capital; but the chances for mere clerks are not good." Farm labor wages in these parts are recorded as being between $25 and $30 per month, and lumber mills wages between $60 and $90 per month for first-class hands. It is also noted that "Chinamen work for the railroads and boards themselves at $1.00 a day, and in winter take contracts for grubbing brush land." There are ten full-page illustrations which include a two-page "Bird's Eye View of Portland, Oregon," "Saw Mill on Puget Sound, W.T.," "Astoria, Oregon, Entrance to Columbia River," "First Street, Portland, Oregon," and "Commercial Street, Seattle, W.T." with folding map of the region (Unfolded 28 1/2 x 18 inches) in the back. Spine and outer edges of wrappers sunned, else good. (Inventory #: 40603)
$585.00 add to cart Available from Bookpress
Share this item