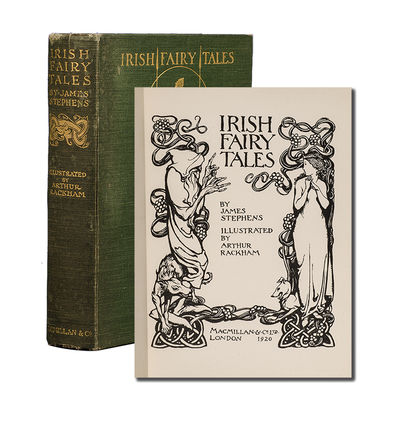 by [Arthur Rackham] Stephens, James
London: Macmillan & Co., Ltd, 1920. First trade edition. Publisher's gilt-stamped green cloth. Top edge stained green. Corners and spine extremities a little rubbed. Sixteen full color plates with captioned tissue guards, twenty-one drawings in black and white. A Near Fine copy. The fairy tales in this book include: The Story of Tuan mac Cairill The Boyhood of Fionn The Birth of Bran Oisin's Mother The Wooing of Becfola The Little Brawl at Allen The Carl of the Drab Coat The Enchanted Cave of Cesh Corran Becuma of the White Skin Morgan's Frenzy "Rackham's two great books of the twenties were James Stephens' Irish Fairy Tales of 1920 and Shakespeare's Tempest of 1926... Beyond the softness of style and inventiveness, the most striking thing about the colour plates for Irish Fairy Tales is the felicitous and appropriate use of Celtic borders" (Gettings 143). "Rackham's books for the English market in the early post-war years included Flora Annie Steel's English Fairy Tales Retold (1918)... and his friend James Stephen's collection of Irish Fairy Tales... In the latter book, Rackham broke new ground in the illustration of Irish literature. He had been persuaded to tackle Stephens's stories by Walter Starkie, who had vowed to give his uncle 'no peace' until he had agreed to illustrate them. In writing the stories, Stephens had attempted to create an Irish equivalent of The Arabian Nights, his own poetic retelling of the stories which existed in the oral tradition and in Gaelic texts, but which had not appeared accessibly in print. Rackham rose to the occasion, and his nephew's haunting of him was justified. The Dublin Independent was particularly warm in welcoming the collection, remarking: 'We read English tales with appreciation because pictures have familiarised us with English imagery. A Fenian tale lacks imagery because we have no art to give it colour and shape to what are presently only names. Some of Mr. Rackham's pictures are pure poems - they set you dreaming" (Hamilton 128). Latimore and Haskell 52. Riall 138. (Inventory #: 3712)
$650.00 add to cart or Buy Direct from
Whitmore Rare Books
Share this item