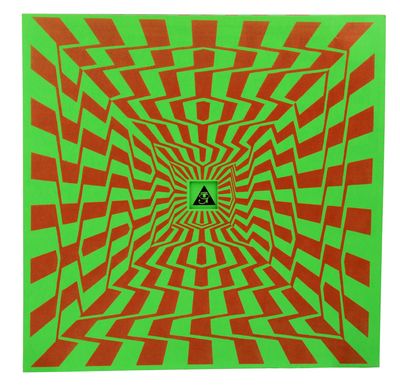 by McCloud, Mark; Mark Van Proyen [Introduction]; Carlo McCormick
San Francisco: San Francisco Art Institute, 1987. First Edition. Near Fine. A catalogue for a 1987 San Francisco Art Institute show featuring LSD blotter art in an unusual, eye-popping format. Two 12" x 12" double-sided sheets screen printed with neon LSD blotter art designs, and four 8.5" x 11" sheets in pastel colors (containing an introduction and the essay ''A Culture In Disguise'' by Carlo McCormick), laid into three-panel interlocking gatefold cover with a small die cut triangle framing a gilt all-seeing eye when folded in one of a number of possible ways. Slight crease to one corner of gatefold, else Fine. Rare. Mark McCloud was a collector of LSD blotter art who lived in San Francisco since the '60s; this SFAI exhibit let the public sample his stash on the 20th anniversary of the Summer of Love. Seconds critic Andy Soma wrote, "The legendary party at the opening of that show shed an appropriately distorted light on the hundreds of framed icons running along the walls of the large gallery space, as well as on local bands like Tragic Mullato and ex-San Franciscans Saqqara Dogs, as they gave the revellers something to aurally contemplate while the hours, shall we say passed." It was such a hit that a New York show was then arranged. (Inventory #: 140940106)
$300.00 add to cart Available from
Burnside Rare Books
Share this item
Burnside Rare Books
Offered by

by Thayer, John B.