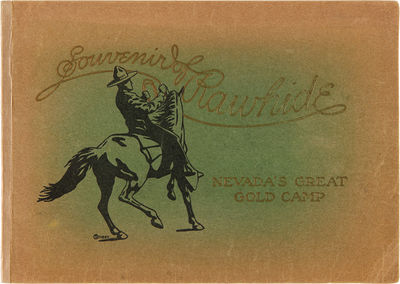 by Johnson, Ned E.
Rawhide, Nv.: N.E. Johnson, Publisher, 1908. [44]pp. plus folding panoramic photograph. Oblong octavo. Original pictorial wrappers. Uneven sunning and some soiling to wrappers, mild edge wear, hinges a bit tender. Contents a touch toned but clean. Panoramic photograph neatly repaired along one fold line. Very good. An impressive Nevada promotional photographic viewbook produced by a noted Nevada photographer, Ned E. Johnson, who himself lived in Rawhide. One page of promotional history on Rawhide written by Pacific Coast Agent F.W. Clarke is designed to "show the public at large the marvelous growth of the camp from the time of its inception to the present day." This growth had taken place in just a little over a year. The remainder is illustrated with mostly full-page photographs, all taken by Johnson in 1907 or 1908. Johnson's photographs picture miners and prospectors, early tent settlements, elevated views of the mining company and developing town, mining leases and claims from several named companies, the Rawhide Club Saloon, multiple street and town views, the Rawhide Hotel, the arrival of a mining drill by railcar, the arrival of an automobile at the First Bank of Rawhide, and a small portrait of Johnson himself, among other images. The highlight of the book is a large folding panoramic photograph of Rawhide tipped-in to the inside rear wrapper, titled "Panorama of Rawhide, April 15, 1908 Taken from Hooligan Hill." The panorama, measuring 7 1/2 x 36 inches, features Rawhide from Crescent Peak and Silver King Hill to Murray Hill. The picture shows a town that came a long way from a few tents to a bustling township in little over a year. The photographer and publisher, Ned E. Johnson produced photographs for towns all across Nevada, including Rhyolite, Rochester, Indian Springs, Las Vegas, Goldfield, Weepah, and Black Canyon. He also published at least two well-known souvenir photographic books of Nevada towns, namely this one of his home town and another touting Tonopah. "Rawhide comes back to life in scenes with excellent contemporary boom town photography...even a photo of a 'traffic jam' of freight wagons in the business district" - Paher. "A fascinating pictorial record of 'the most phenomenal gold camp the world has ever known'" - Eberstadt. A rare photographic record of an Old West Nevada town that documents the kind of explosive development that could take place when gold is found in "them thar hills." PAHER 986. EBERSTADT 132:506. (Inventory #: WRCAM55607)
$850.00 add to cart or Buy Direct from
William Reese Co. - Americana
Share this item