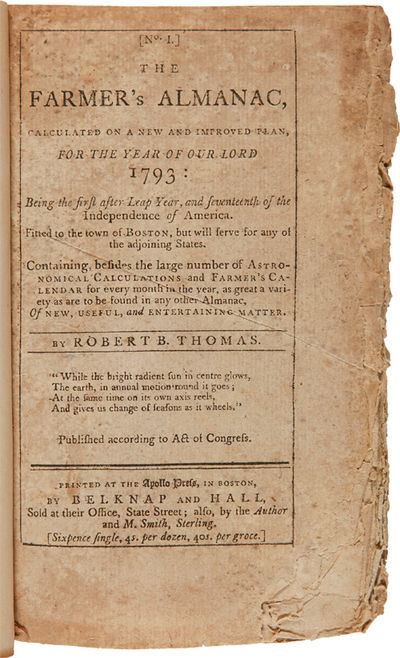 by [Thomas, Robert Bailey]
Boston, 1908. 116 issues bound in seven volumes. Lacking: last leaf of 1796; second leaf of 1799; last four leaves of 1800; last two leaves of 1803, and the top third of the calendar leaves (twelve total) are cut away (presumably to retain the emblems); one leaf of 1806; two leaves of 1809; four leaves of 1812, and top third of one calendar leaf cut away; one leaf of 1815; one leaf of 1817; two leaves of 1818; small pieces cut out of two leaves of 1819; two leaves of 1822; two leaves of 1824; two leaves of 1829; three leaves of 1830; 24pp. publisher's catalogue from 1836; top half of one leaf from 1854; two leaves from 1864; bottom half of one leaf from 1867. Issues of 1846, 1860, 1872-1909 all or partially unopened; 1855-58, 1860-63, 1864 (front only), 1865, 1869-86, 1887 (rear only), 1888-1909 have yellow wrappers bound in; 1865 has contemporary milk receipt laid in; 1866 bound in marbled paper wrappers, with "R.D.C. 1866" (Richard D. Child) on front free endpaper (see below); 1868 bound in marbled paper wrappers, with annotations on front free endpaper, and twelve blank leaves bound in; 1869 with [12]pp. of ads preceding and following the main text. Bound in early 20th-century three quarter tan morocco and marbled boards, spines gilt, raised bands, James Frothingham Hunnewell's initials in the bottom compartment. Some shelf wear and wear to extremities, spine end of first volume fratyed. Occasional foxing and tanning (mostly with older issues), some chips and small closed tears from handling. Overall very good. Most issues untrimmed. A significant 116-issue run, beginning with the first issue, of this most durable and popular American almanac, bound for James F. Hunnewell, with his bookplate and a custom- printed general titlepage in six of the seven volumes. The present run lacks only the issue for 1794 for the entire period between the first issue of the almaanc, published in 1792, and the final issue in this collection, dated 1908. THE FARMER'S ALMANAC was often the only reference work found in many American homes, and it provided both essential agricultural information and casual diversion. These issues contain notices regarding the courts of New England, calendars of college vacations, current events, poesy, literary bits, history, and planting, weather, maps, and road conditions. The helpful hints regarding agriculture include articles on cultivation of corn, potatoes, carrots, and fruit trees; manuring; cure of diseases in crops and trees, and more. As times changed, the text of the almanac kept pace, offering insight into the evolution of the American domestic scene. As the almanac gained in popularity, sundry issue points were introduced as the almanac was printed in several different locations. All of the issues in this collection were printed in Boston. The title was formally changed to THE OLD FARMER'S ALMANAC... beginning with the issue for 1848. "The series of almanacs started by Robert Thomas with his FARMER'S ALMANAC has continued unbroken to the present day, since 1848 under the name OLD FARMER'S ALMANAC. It was owned by the Thomas family until 1904, or for over 110 years, for when Thomas died a wealthy man in 1846, his two nephews continued the publication" - GROLIER AMERICAN HUNDRED. The issues of 1818, 1822, 1828, 1832-35, 1837-38, 1840-41, 1843-45, and 1848 were designated "office" copies, belonging to Daniel Abbot (1777-1853), the "father of Nashua," New Hampshire. Each issue has twelve manuscript leaves in the same contemporary hand bound in, interleaved with the calendar leaves, with notes about court proceedings and related legal affairs on the rectos and about gardening and the weather on many of the versos. Starting in 1843, some titlepages have "Abbot & Fox" (Charles J. Fox joined Abbot's law practice in 1834, but died in 1846). Several other issues in this run have interesting marks of provenance. The titlepage of the 1804 issue is inscribed "Hannah Johnson"; of 1807 is inscribed "Holden Woodbridge"; and the titlepage of 1847 is inscribed "Mr. Elisha Boles." The 1830 almanac has several blank leaves bound in (some just stubs), one with notes about weather in a contemporary hand; 1831 has twelve leaves bound in, most with extensive annotations in a contemporary hand with notes about the weather, farming and livestock, trips to Boston, Providence, nearby towns, and land deals. The 1866 issue, belonging to Richard D. Child, is bound in marbled paper wrappers with twelve leaves bound in, interleaved with the calendar leaves, with annotations in a contemporary hand recording rent payments received and other transactions, including a note about having "engaged a colored girl named Frances [ ] Simms, aged 12 yrs. Dec 25th 1865, and agreed to pay her $50.00 cash on the 18th birthday, Dec 25, 1871." The 1868 issue is similarly bound in marbled paper wrappers, with annotations on the front free endpaper, and twelve blank leaves bound in. James Frothingham Hunnewell (1832-1910), who assembled this run of the FARMER'S ALMANAC, was a Massachusetts merchant, antiquarian, historian, and bibliographer who authored several works, most notably the BIBLIOGRAPHY OF CHARLESTOWN AND BUNKER HILL and the foundational BIBLIOGRAPHY OF THE HAWAIIAN ISLANDS. Hunnewell had a deep appreciation of New England history and how it related to the larger world, evidenced by his committed service to and involvement with the American Antiquarian Society. A handsome set. While many institutions possess runs of equal or greater size, they are uncommon in the market. SABIN 95447. SHAW & SHOEMAKER (passim). ESTC W27041, W329, W24797, W22592, W22588, W22591, W27042. EVANS 26254, 29626, 31294, 32922, 34654, 36414, 38630. DRAKE (passim). Edward E. Parker, HISTORY OF THE CITY OF NASHUA, N.H.... (Nashua: Telegraph Publishing Co., 1897). (Inventory #: WRCAM55779)
$5,500.00 add to cart or Buy Direct from
William Reese Co. - Americana
Share this item