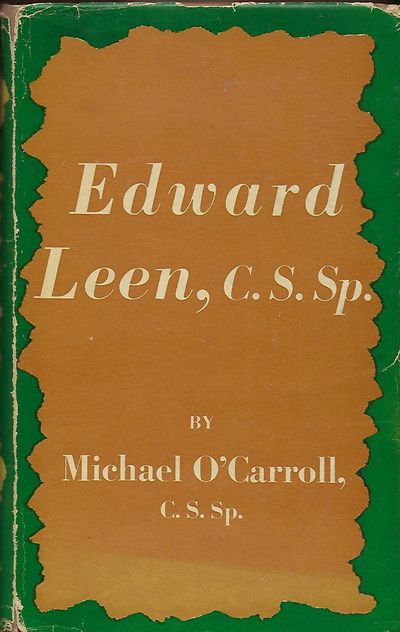 by O'CARROLL, Michael
Westminster, Maryland: The Newman Press, 1953. First Edition. Signed inscription from O'Carroll on the front endpaper: "With very best wishes, Michael L. O'Connor. C.S. Sp. 30th May 1956." One of the best-known Irish priests of his generation, Edward Leen [1885-1944] was an educator, retreat master and spiritual writer. Leen established his reputation with a series of books that appeared rapidly after 1935. All his writings are thoroughly centered on Christ and present a synthesis of Christian wisdom, linking the person's own spiritual life to that of Christ. His philosophy of Christian humanism gave rise to many controversies, but its plea that catechetical instruction take a psychological rather than logical approach and stress God's love and mercy rather than His justice has finally been heard. O'Carroll, who knew Father Leen personally for 20 years, wrote this biography to meet a constant demand since Leen's death. A scarce book, especially signed by the author. 8vo., tan cloth in dust jacket; 278 pages. Frontispiece Portrait of Father Leen.. Very Good (covers nice; contents clean & tight with little browning endpapers); little wear & rubbing (nicks & short tears) d/j. A nice copy with an interesting association! (Inventory #: 57006)
$125.00 add to cart or Buy Direct from Antic Hay Books
Share this item
Antic Hay Books
Offered by

Athens : The University of Georgia Press , 1979
(click for more details about DELTA: THE HISTORY OF AN AIRLINE)
View all from this seller>