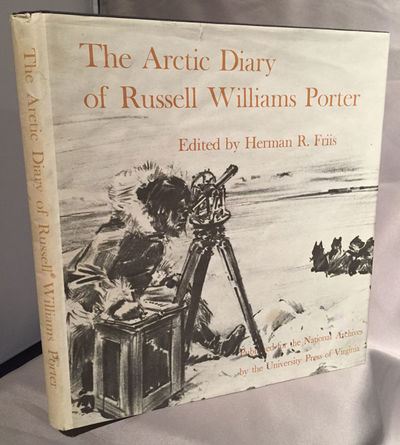 by Friis, Herman [ed.]
Charlottesville, VA: University Press of Virginia, 1976. First Edition. Near Fine/Very Good. Charlottesville, VA: University Press of Virginia; 1976; First Edition [9.75x10.25"]; Dark blue cloth covers with gilt lettering on spine; Cream dust jacket with light brown lettering on front and spine, illustration of Arctic surveyor on front, photograph of Porter fishing on rear; xii, 171 pp., [1], 82 black and white, with several colored, pen and ink illustrations by Porter of Arctic life and Inuit people; Very light shelf wear and minimal fading to only top and bottom edges of cover; Some soiling and shelf wear of dust jacket, 3/8" closed tear top front edge and a little wear at top and bottom of spine. Overall condition is near fine. Russell William Porter [1871-1949] was am artist, engineer, amateur astronomer and explorer. He was inspired to go to the Arctic from an 1892 lecture by Robert Peary on his reconnaissance across northern Greenland. He made a voyage to Greenland with Frederick Cook in 1894. During the next 18 years he participated in ten Arctic expeditions. From the Preface, "...he took many photographs...made numerous pencil sketches, watercolor and oil paintings, pastel sketches, and pen-and-ink drawings; these represent some of the most valuable graphic records of the Arctic for this period [1894 to 1912] of pioneering geographical exploration." He later settle down to a career in astrophysics and optics. He taught at MIT, worked on optics for the Government during World War I and started an amateur telescope manufacturing company. in 1928, George Hale at Cal Tech invited him to work on the design of the 200" Mount Palomar telescope. While in California, Porter wrote his Arctic Diary in 1930-31 from earlier the diaries, notes and sketchbooks. (Inventory #: 11748)
$58.00 add to cart Available from
David Spilman Fine Books
Share this item